Laughing or Make Me Smile


Adjacent to the beach at English Bay is a little patch of green known as Morton Park Triangle that, over the years, has become a premier location for hosting public art exhibits.  It started in 1998 when Buschlen Mowatt Galleries and the Vancouver Parks Board started a bi-annual/Biennale sculpture exhibition of international artists with pieces of public art strategically placed along various walkways, parks and beaches.  At any time folks could walk around the sculptures, touch them, and take pictures, and it was all free. 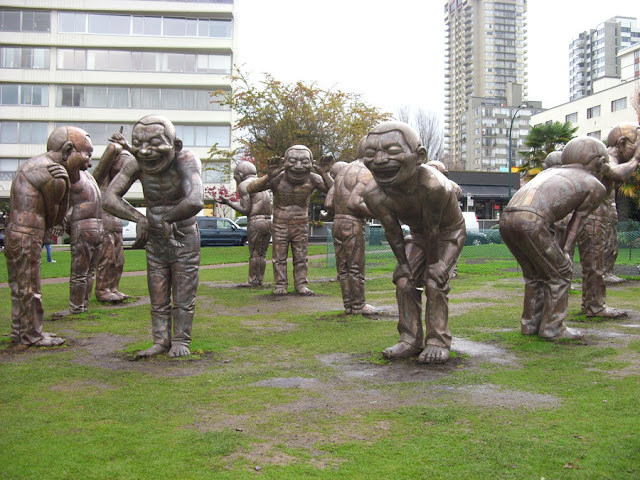 Everyone had their favourite sculpture, but there has never been a sculpture as popular as the A-Maze-ing Laughter collection of huge, bronze figures set up in the Morton Park Triangle. Each of the 14 happy bronze-cast males is 8.5 feet tall and weighs 551 pounds. For whatever reason these grinning statues, depicting the artist's face, have captured the public imagination and, throughout the day, children and adults can be seen climbing on the statues, posing for photos and trying to mimic the poses.


It isn't just people wanting to get their photo taken, it seems there are others who want to contribute some of their own artistic flair to the exhibit, a tribute as it were to the creator.  One example being the Christmas morning decorations that mysteriously appeared and then just as mysteriously vanished.  Might even have been Santa himself making a guest appearance.

Recently there was the boating safety awareness campaign that outfitted all the happy chaps with their own life jackets and, as this type of guerrilla marketing catches on, I can only imagine some of the other costumes that will start to appear.  It's all a bit ironic when one considers the creations of the artist, Yue Minjun, a leader in the Chinese artistic movement known as Cynical Realism, are in response to the suppression of freedom following the Tiananmen Square demonstrations.  Even though we live in a land of complete political and artistic freedom, there's something about these sculptures that draws us into their happy embrace.


Like all the other artwork on display, the A-Maze-ing Laughter sculpture was only meant to be a temporary exhibit until it could be auctioned off.  However, because of its popularity, a proposal was made to keep it in Vancouver for at least 20 years and Yue Minjun agreed to drop the price of the piece from $5 million to $1.5 million.  Two donors were found who were willing to buy the work at the reduced price, but only if the sculptures were given a long-term home on the site by English Bay.  A deal was made with the Parks Board and now A-Maze-ing Laughter, Vancouver's most photographed art exhibit has a permanent home.  If there's one universal emotion that brings us all together it's laughter, and it's amazing indeed what a little laughter can do.

Posted by Nelson Quiroga at 1:44 PM