Everyone has their favourite sport and, while the Olympics showcase just about every sport that exists, my favourite events of course are the swimming ones.  However, after watching the awesome performance of Michael Phelps in this summer's Olympics, I was struck by the fact of how few people there are who take up the sport of swimming.  This in spite of the fact 3/4 of our planet is covered in sea water and 80% of the world's population lives within 60 miles of the ocean.

100 million years ago mammals became the dominant animals on earth, the culmination of a 500 million year struggle to climb out of the primordial swamp and evolve into land based creatures. While mankind only started making its appearance in the last 200,000 years I guess it's no surprise that, after spending this much time getting onto land, the first choice in sports usually involves running in some form or another. There is some sort of innate reluctance for most mammals in general, and humans in particular, to get wet even if they are quite capable of being very good swimmers. 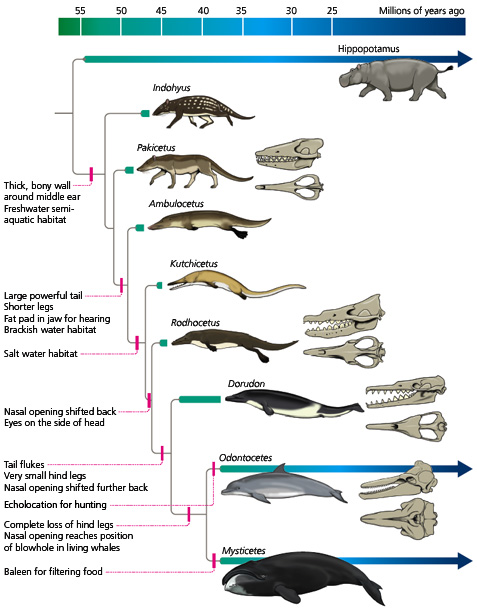 Nonetheless, in spite of finally getting their feet on dry land, an interesting thing happened about 50 million years ago when some of the mammals decided they wanted to get back into the ocean.  The reasons aren't exactly clear, but the most obvious one is that it was easier to get a bite to eat. Even today fish still provides the majority of humans with their protein, in spite of overfishing and everything else we've done, and the ocean, with its plankton based ecosystem, continues to support an incredible number and variety of fish, birds, reptiles and mammals.


There are three main groups of marine mammals; the sirenians (manatees & dugongs),  pinnipeds (seals, sea lions & walruses), and cetaceans (whales, dolphins & porpoises), though polar bears and otters are also starting to be classed as marine mammals.  While pinnipeds spend most of their time in the water they are only considered semi-aquatic because they still have to mate, breed, and molt on land.  Sirenians and cetaceans on the other hand are fully aquatic ocean dwellers.


In evolutionary terms it didn't take that long for the land based ancestors of cetaceans, sirenians, and pinnipeds to get back into the ocean (about 15 million years) but they didn't turn into fish and they still need to breathe air from the surface.  Amongst other things hands and feet adapted to become flippers and tail flukes for propulsion, lungs and other internal organs evolved to facilitate the high pressure of  being underwater for extended periods of time, and they developed blubber as a means of conserving heat and providing insulation.  Mankind, on the other hand, has been a little faster adapting to the ocean thanks to inventions like wetsuits for warmth, SCUBA gear for underwater breathing and, most importantly, developing a variety of swimming techniques that allows us to use the arms and legs we already have without waiting for them to turn into flippers.


There are four primary swimming strokes now recognized by FINA, the international association that administers swimming competitions; backstroke, breaststroke, butterfly, and freestyle which is normally front crawl  but can be any form of swimming style.  It has taken approximately 100 years to develop these distinct swimming strokes and they continue to be refined and improved upon even to this day as scientists and coaches gain more knowledge about propulsion, hydrodynamics, and conditioning. Butterfly, the newest stroke to be developed, is the closest swimming style to that of the marine mammals and, in retrospect, given man's capacity to copy Nature, the one that should have been developed first.

From ancient pictures and drawings showing people swimming a primitive form of breaststroke it would appear this was the first stroke humans learned and it was certainly the most common stroke for most of the world until the 20th century.  By 1844 the sidestroke had also been developed and, along with breaststroke, were the only strokes used in swimming competitions organized by the National Swimming Society in England, in spite of being beaten by North American Indians who used a swimming style that resembled what would soon become known as front crawl. By the 1900 Paris Olympics an early form of backstroke (essentially an upside down breaststroke) was also a recognized swimming style.

By 1895 the sidestroke had evolved to an overarm sidestroke and, in 1901, the forerunner of front crawl a stroke called the trudgen, was introduced (after John Trudgen who copied it from South American Indians, using a hand over hand style combined with a scissor kick). In 1902 the trudgen was modified  to combine an up and down kick with an alternating overarm stroke and became known as the Australian crawl after the Australian Richard Cavill who swam 100 yards in 58.4 seconds to win the International Championships. Cavill's technique had been inspired by a Solomon Island native who in turn came from a long line of Polynesian swimming tradition that was far more advanced than the Europeans. An upside down version of this stroke then became the new style of backstroke pioneered by Harry Hebner.

In the 1933 the breaststroke was modified by Henry Myers to use an out of water butterfly style arm action with the regular breaststroke kick and was called butterfly breaststroke. The dolphin kick, invented in 1935 by Jack Sieg, was not allowed to be combined with the butterfly arm action until the 1950's when it was finally recognized as a separate stroke for competition. Breaststroke then went back to a stroke with the arms recovering in front of the breast and the 1956 Melbourne Olympics was the first year the four recognized competitive swimming strokes were on display.

The first person to break the one minute mark in any 100 metre swim was Johnny Weismuller in 1922, a man more famous later for playing the role of Tarzan in the movies, than the freestyle swimming record he held for 12 years. It took until the 1960's before anyone swimming butterfly or backstroke could break the one minute mark, and it took until 2001 before the one minute mark was broken for breaststroke.  Since then the constant refinements of various techniques in each of the swimming strokes has led to new records being broken almost every year with the exception of the occasional superstar like Mark Spitz who held  the butterfly record from 1967-1972 and the freestyle record from 1970-1975.

But swimming isn't all about speed.  In fact most swimming is about keeping a measured pace for a certain period of time with perhaps only occasional bursts of speed.  With the exception of perhaps water polo, swimming is for the most part a solitary sport and, even if people are swimming with someone else, there isn't much opportunity to chat.  Swimming can be done in pools or in open water, but it's in the open water where the solitary nature of the sport really catches people's imagination particularly after Byron made his famous crossing of the Hellespont in 1810, a distance of between 1 -3 miles depending on current and the actual entry & exit points.

But whether it's romantic inspiration or simply folks wanting to pit themselves against the open water, the most famous open water swim is of course the English Channel.  The narrowest point between Dover and Calais is 21 miles and the first person to succeed was Captain Mathew Webb in 1875 and it took him 21:45 hours doing breaststroke.  By 1923 the record was down to 16:33 hours until Gertrude Ederle completed it in 1926 in 14:39 hours becoming not only the first woman to complete the swim but also the first person to do it using front crawl. When she returned home she was greeted with a ticker-tape parade in New York City and more than 2 million people who turned up to see her.  It was her second ticker-tape parade in two years when she was also part of the one given to the illustrious 1924 Paris Olympics team that also included swimming team-mate Johnny Weismuller.  The English Channel swimming record is now 6:55 hours and held by Trent Grimsey, an Australian.