These days all Vancouverites can talk about is real estate. Bidding wars for property, outrageous prices being paid, houses being torn down to build new mansions or entire blocks of townhouses, highrise apartment buildings going up everywhere after being sold out in advance, crooked real estate agents, corruption within City Hall and, at the end of the day, there's no affordable housing to be found.  It's all the fault of foreigners who are taking over, particularly, the Chinese, who arrive daily on our doorstep with suitcases full of cash they have been spiriting out of their own country. One could almost be forgiven for thinking this is payback time or karma for all the nastiness we imposed on the Chinese and other Asians in our not so distant and sordid past.

While the first Chinese to arrive in British Columbia came in 1858 to take part in the Fraser River gold rush the real immigration came in the 1880's when 15,000 came over to work for the CPR on the national railway being built. They earned $1.00 a day, compared to the $1.50-$2.50 a day for the white men and still had to pay for their food & camping gear which was supplied for free to the white men. They faced such harsh and dangerous living and working conditions, tunnelling and using explosives and subsisting on a vitamin poor diet of rice & fish, that it's estimated for every mile of track that was laid four of them died. When the railway was completed in 1885 B.C. was hit with a recession and labour groups were fearful that cheap Chinese labour would take away their jobs.
Bowing to provincial pressure the federal government in 1885 passed the Chinese Immigration Act which stipulated that all Chinese must pay a $50.00 head tax. Every few years the tax was raised until by 1904 it had reached $500.00 equivalent to almost two years pay.  An "Act to restrict and regulate Chinese immigration into Canda" this was the first in Canada's history to exclude immigrants based on their ethnic origin. Even with this heavy tax, which discouraged the immigration of women and families and created a "bachelor society" of men sending home their money, the government felt it wasn't doing enough to stop immigration and in 1923 passed the Chinese Exclusion Act banning all Chinese immigration to Canada which now eliminated any hope of these men ever being re-united with their families. This Act wasn't repealed until 1947 and only in 1950 was the Immigration Act amended to allow spouses and unmarried children of Canadian citizens to immigrate.

Not content with laws that forbid Asians from voting, practising law or pharmacy, be elected to public office, serve on juries, have careers in public works, education, the civil service or be members of a union or own property in certain parts of the city, the Asiatic Exclusion League was formed on August 12, 2007 with the aim of keeping Oriental immigrants out of B.C. Alexander Bethune, the Mayor of Vancouver, was also a member of the League and on September 7th he permitted them to hold an inflammatory rally at City Hall which then led to a crowd of 8,000 rampaging through Chinatown and Japantown vandalizing shops and causing thousands of dollars of damage. The rioting lasted three days before police finally decided to close the streets and restore order. 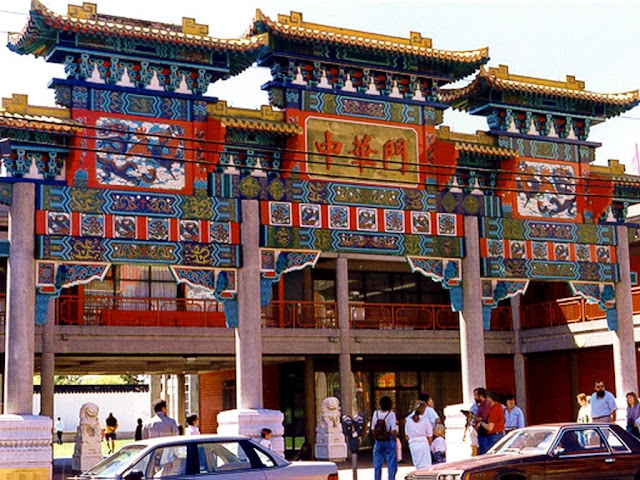 Asians in general and Chinese in particular have spent the last 150 years working very hard to get ahead in this city in spite of all the racism directed against them. Where anybody got the idea this country is only for white people simply because the British and French were the first to arrive here and expropriate the land from the First Nations people is beyond me. In fact when you think about it even the ancestors of First Nations people were originally from Asia. It should come as no surprise that Vancouver is viewed by the rest of the world as paradise and a good many Vancouverites have "won the lottery" by cashing in on the selling of their property. Time to start saying "Welcome to Chinatown".