Will It Go Round In Circles?

In an earlier post I wrote about the how salmon consume to live as opposed to humans who live to consume, and this in turn prompted me to reflect for a moment on the history of our development. We started out as a species of hunter gatherers where we did in fact consume to live, and gradually we became a collection of agricultural societies able to domesticate plants & animals to produce all the food we needed and trade the excess. Then, with the industrial revolution, new sources of power and processes transformed transportation, manufacturing, farming, and science in such a profound way that we can't even imagine what it must have been like to live before, and consumption for its own sake now became our reason for living. 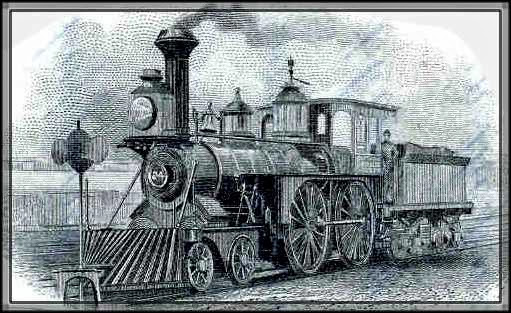 It wasn't until until the 18th century industrial age, that the pace of human development really started to take off. The agricultural revolution started 12,000 years ago and lasted with very little fundamental change until large scale factories appeared and people began migrating from the farms and fields to the big cities.  In less than 200 years this has taken us from the horse & buggy to outer space with electricity, kitchen appliances, the automobile, telephones, TV, airplanes, modern medicine, and everything else, including the Beatles, falling somewhere in between. 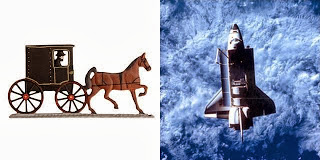 While there's no question all these new inventions, ideas, and methods have raised the standard of living and life expectancy of the vast majority of the human population, it has also come at a cost to our environment, particularly the oceans, where millions of gallons of industrial waste, fertilizer run-off, and sewage are discharged every year, along with an estimated 6 million tons of debris. 80% of this marine debris is plastic, everything from bags & bottles to shoes & toys and, because for the most part it doesn't bio-degrade, it continues to accumulate along the coastlines and in the centre of converging ocean currents known as gyres. The Great Pacific Garbage Patch just north of Hawaii is one example, and it's estimated to contain 3 million tons of plastic in an area twice the size of Texas. 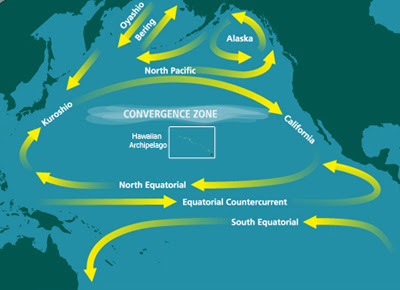 Unlike organic debris which bio-degrades, plastic only disintegrates into smaller and smaller pieces until it becomes too small to be seen.  Nonetheless it's still there, and testing now shows it outnumbers marine plankton 6:1 with an estimated 6 pounds of plastic per cubic metre of seawater as opposed to 1 pound of plankton in the Great Pacific Garbage Patch.  These plastics end up in the stomachs of marine birds and animals, eventually killing them because they can't be digested  and, once they are consumed by fish, they also enter the entire food chain. Plastic bags which look like edible jellyfish to turtles and plastic 6 pack holders are particularly nasty. 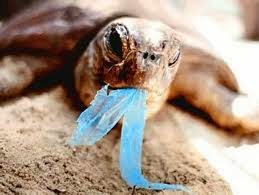 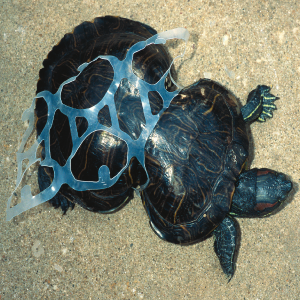 The more we consume the more waste we produce and how long the ocean can continue to absorb all this trash is a topic being debated by scientists and lawmakers, but what doesn't seem to be debated is the need for all this waste in the first place.  We have now reached a stage in our development where the economy is everything and it depends on goods being produced and consumed.  It's not good enough for everyone to have a computer and a wide screen TV, a closet full of clothes, a kitchen overflowing with dish-ware and appliances, and of course a car; they need to be constantly replaced; and enough is never enough.  If consumer spending declines then companies go out of business and people lose their jobs. 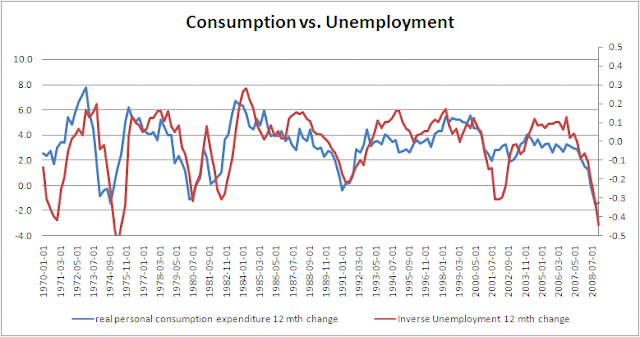 We've come a long way from having to worry about where the next meal is coming from and no one is suggesting we need to go backwards, especially when so many people in other parts of the world are still struggling to catch up with the more developed world, but perhaps there's a need for a new perspective on our world economy. For example, why can't production be shifted to areas that are more in need of the goods, and reverse rewards put in place for not consuming. Some of these reverse rewards could include higher interest rates for saving money instead of spending it and higher consumption taxes when you do. Instead of trying to encourage people to have more babies, (which the world does not need), promote more immigration from the disadvantaged countries. Rather than worrying about everyone working 40 hours a week we could instead institute a shorter work week and make unemployment a desired state by rewarding involvement in the arts, community service, and various recreational fields. We could put a special tax on pre-packaged food that would encourage people to start cooking from scratch again and, most of all, we could make disposable products more expensive than ones that last longer. 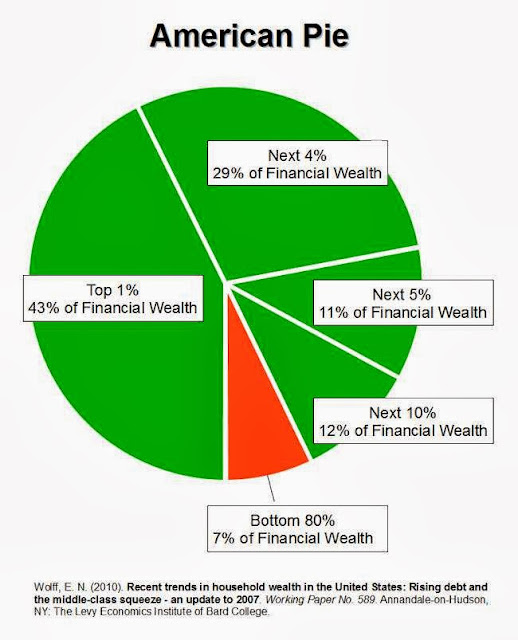 In spite of all the advances we've made in food, clothing, and shelter, we're working harder than ever to support our basic consumption habits. Long commutes in more than one car, so we can have a bigger house than we need out in the suburbs, long hours at work to pay for everything our families demand, and little time to relax. Why do we feel so compelled to keep buying and spending beyond our means and actual needs and put ourselves in debt?  Why are we so dissatisfied with what we already have? What happened to the leisure time in our lives and simpler ways of enjoying life? We need to get away from living to consume, with its careless attitude towards the waste it produces, and find ways of enjoying life a different way. For those who wonder where the money will come to fund the inevitable unemployment benefits and pensions I would suggest asking the top 5% of the population, who already have more than 70% of all the wealth, to pay up. These people and their families can't hope to spend even the interest on their money over the course of their lifetime, or for many generations thereafter, so a modest tax of say 10% on all cash & assets over a $1 million, like Cyprus recently implemented, would pay for a lot of social services and government debt. 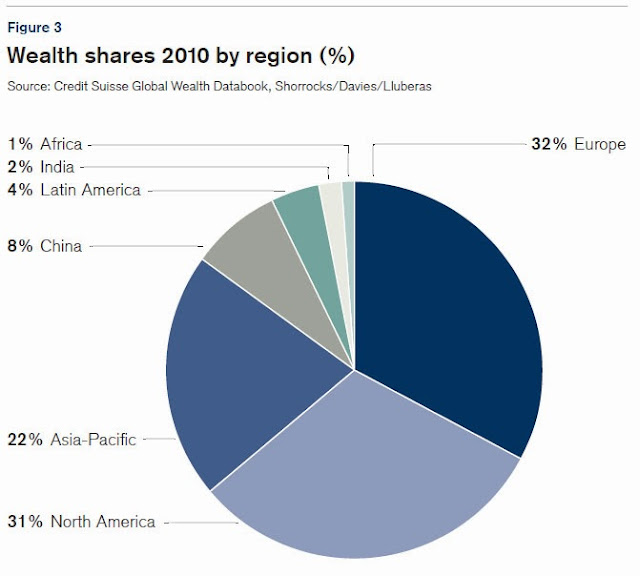 With most of the world's wealth residing in the developed world where, not surprisingly, most of the ocean debris is created, it would seem a reduction in consumption would not only have a significant impact on the amount of garbage being produced, it could also have a huge effect on bringing about more of a global economic balance. We will always need to consume things, but we also need to start thinking more intelligently about our consumption needs.  Perhaps with technology, our latest revolution, this may come to pass though unfortunately "data mining" the latest trend, is nothing more than another way of trying to sell us more stuff we don't need. Success in finding a way of resolving this issue means preserving our ocean's health, and failure means watching the garbage continue going round in circles. 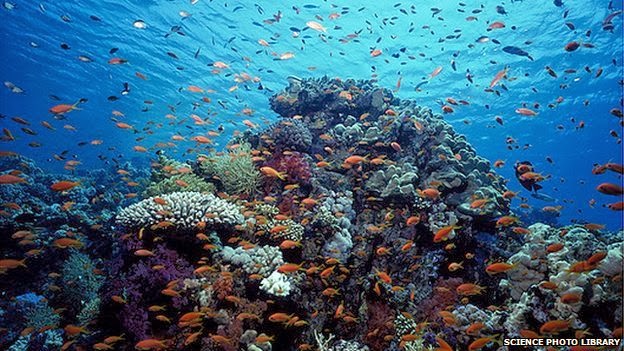