With the ocean warming up a little in summer I find myself occasionally sharing the waters of English Bay with a few other swimmers who have also discovered the pleasures of swimming in the natural environment.  If our paths cross and we stop to chat this will often attract a curious seal or two who like to pop up from the depths and listen to the conversation.  Usually only showing their head and gorgeous eyes, these shy, little messengers of Neptune (or "Neptune's eyes" as they are referred to by the artist and sculptor, Debra Bevaart) haven't got a threatening bone in their body.

Non possessive in every sense, they share fishing territory and haulouts with other seals, change mating partners every year. and are quite content to cautiously interact with groups of swimmers or divers whenever they have an encounter.  Fishermen of course are another story, and the seals are quite happy to deprive them of their catch without any qualms or consideration for their trolling efforts. I suppose it's also hard to say thank you when your mouth is full of fish.

This uneasy relationship between fishermen and seals has been going on for a long time, with the fishermen trying unsuccessfully to bring back a cull of the seals (which ended in 1970 when there were only an estimated 10,000 seals left) who they see as competitors for what they perceive to be an ever shrinking supply of fish.  Without getting into a debate over the rights of one group or another to wipe out the fishery, the one thing that everyone agrees on is that the Harbour seal population has made a comeback and continues to increase every year with 125,000 being the latest population estimate.  What nobody seems to understand is the seal population couldn't get that large if there wasn't plenty of fish for them to eat.

While Harbour seals love a good salmon dinner as much as the next person, various rockfish, herring, and hake make up the bulk of their diet. Herring and hake is also a favourite fish of the Dall's porpoise, a high speed cetacean if there ever was one, and one that likes to ride the bow wave of your boat if you are lucky enough to encounter one.  International attention was brought to the Dall's porpoise when it was revealed that thousands of them were being caught in salmon fishing nets and accidentally killed.  In spite of this and the fact the Japanese are licensed to kill 16,000 of them annually, they are not yet considered an endangered species.

On the other hand there is another herring lover which is a threatened species, and that's the Steller sea lion which mostly lives and breeds further north but can be found in the waters of Georgia Strait, particularly in herring season when they flock to one of their favourite haul-outs off of Hornby Island and frolic with scuba divers.  The overfishing of herring in the past, particularly for their roe or eggs which are a delicacy in Japan, caused the Pacific herring fishery to partially collapse in the 1960's and then again completely in 1993.  How the Fisheries Department could allow such a vital link in the food chain, for not only the marine animals but also birds and of course salmon, to fall apart is almost unbelievable until one looks at what happened to the Atlantic fishery and the West Coast salmon fishery to realize how systemic this type of thinking is in our country.


The good news though is that herring stocks are slowly rebuilding which, in turn, is allowing the populations of Harbour seals and Dall's porpoises to increase, and is also thought to be responsible for the return of the occasional Humpback whale in these waters and a group of Pacific white-sided dolphins who have been making numerous appearances in Howe Sound and on either side of Georgia Strait.  Instead of considering  these creatures as competitors they should be viewed as indicators of things finally going right for a change.  Let's see how long the Fisheries folks can resist the pressures of the commercial fishery to destroy things again.

Another thing people tend to forget is that Nature will keep things in balance all on its own.  With an abundance of seals and other marine mammals in the area yet another cetacean has made an appearance lately, and that is the Transient killer whale.  Unlike the Resident killer whales which have evolved to eat only salmon, this Orca species does not eat fish and only eats seals, sea lions, porpoises, dolphins, and other whales. They too have made a significant comeback from only 50 in the 1970's to over 250 of them identified as now plying the waters between Washington and Alaska including of course Georgia Strait.


We were fortunate enough to be one of the first boaters to recently come across a small pod of Transient killer whales off of 3rd Beach who eventually scooped up one of the Harbour seals and then went on their way.  A bit of a happier story for a Harbour seal in Nanaimo around the same time who made an emergency escape onto the swim grid of a sports fisherman who spirited him away from the killer whale pod.  With a ban on the fishing of herring, the seals make a comeback, as do the killer whales, and then a fisherman saves a seal.  Strange how it all comes together. 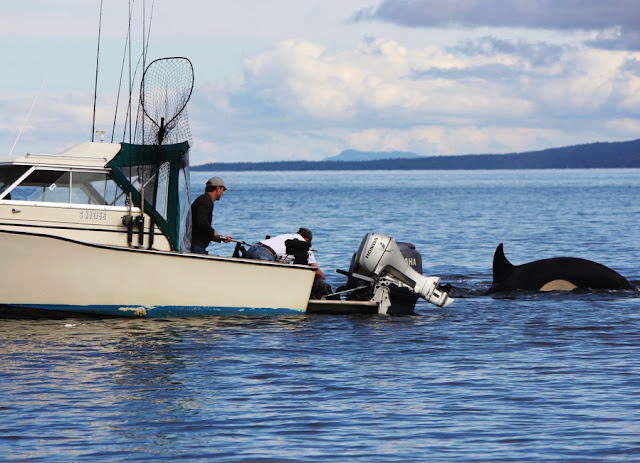 Posted by Nelson Quiroga at 4:23 PM