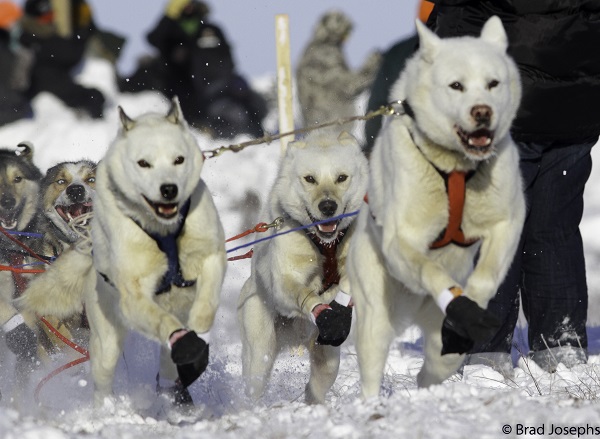 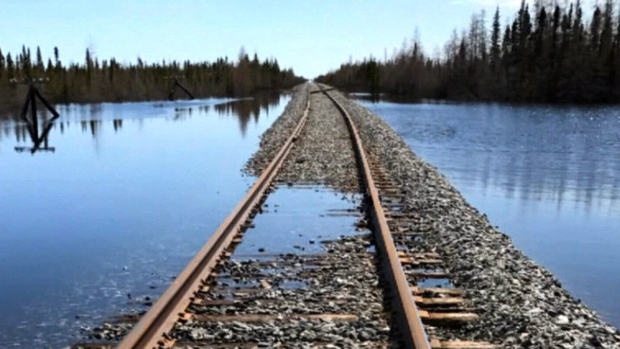 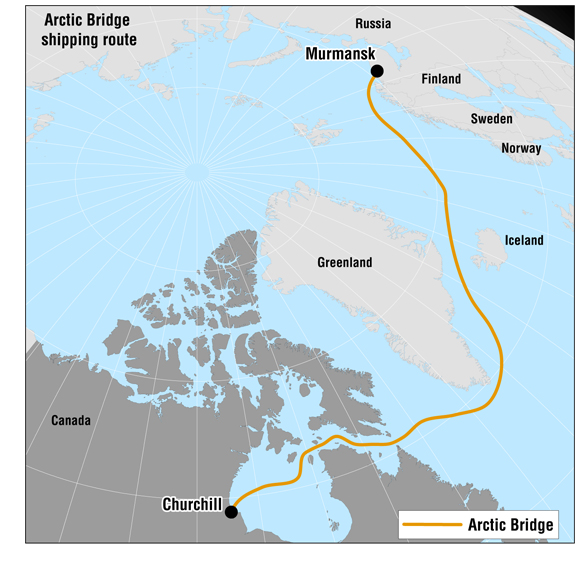 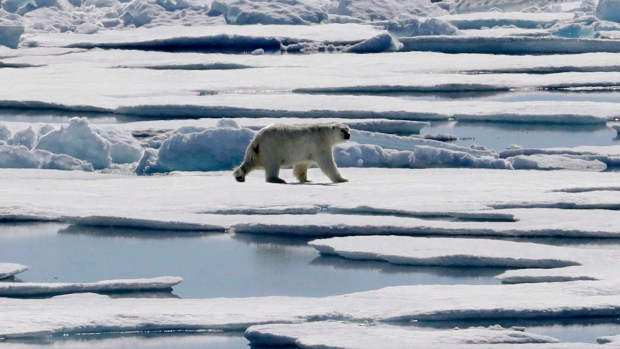 Posted by Nelson Quiroga at 12:40 PM No comments:

I'm Beginning To See The Light 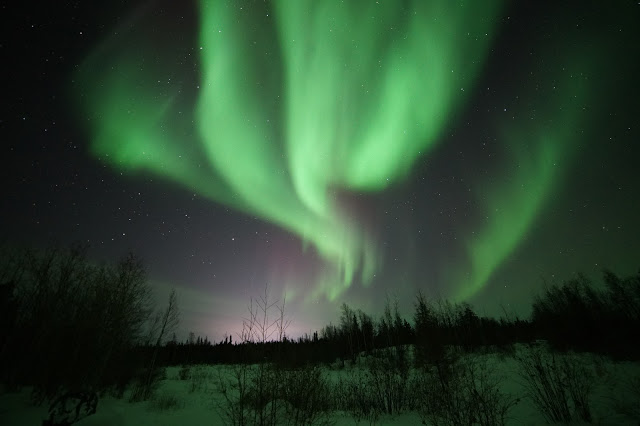 If there is one defining feature of the North country, other than ice & snow, it's undoubtedly the Northern Lights, more properly referred to as the Aurora Borealis. Occurring year round, though not really visible around the summer solstice or when it's cloudy, this magical night time display will always take your breath away no matter how many times they are viewed. And no two nights are ever the same either. 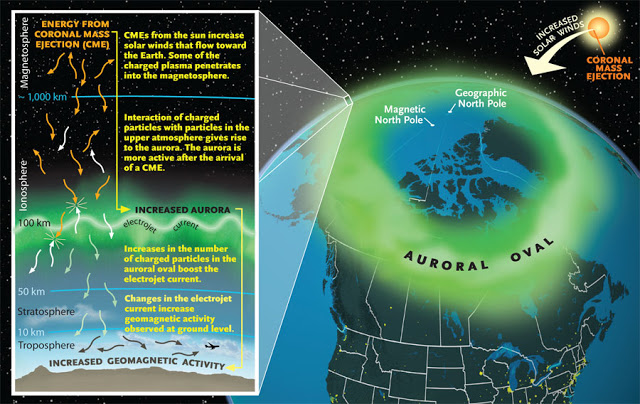 The Aurora Borealis is an incredible light show caused by collisions between electrically charged particles released from the Sun, during sunspot or solar flare activity (referred to as coronal mass ejections) that collide with the oxygen and nitrogen gases in the Earth's atmosphere. Driven by solar wind these particles enter the Earth's atmosphere through the north or south pole where the Earth's magnetic field is weaker. A roughly oval shaped area near the north pole called the Auroral zone offers the best viewing opportunity and, in Canada, one of the most perfectly located viewing spots is Yellowknife. 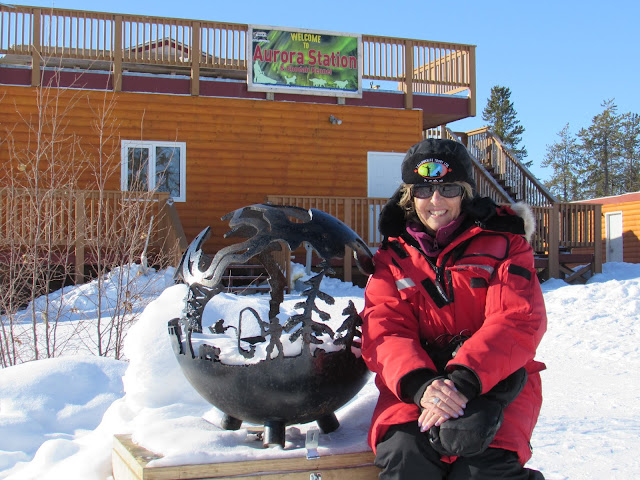 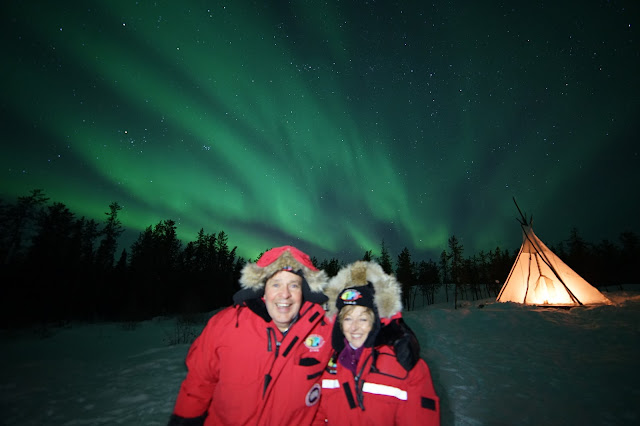 It was a perfectly clear night when we arrived at the viewing station and the Aurora started as soon as it was dark. Driving out of town to get away from any streetlight we were quickly overwhelmed by the display that shimmered and danced across the heavens with incredible speed. Constantly shifting shape, as if an unseen hand was stirring up a cosmic light show, we never knew where to look from one moment to the next. 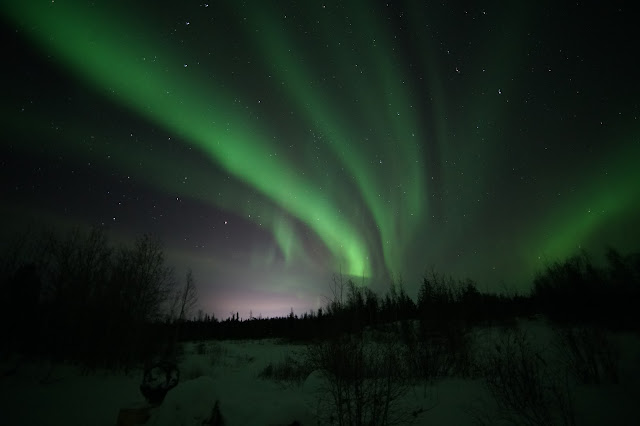 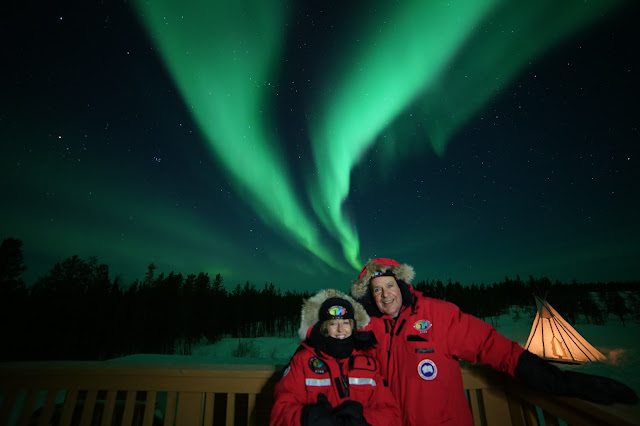 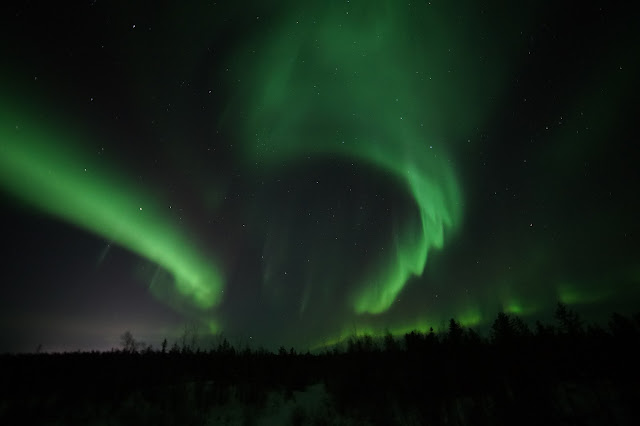 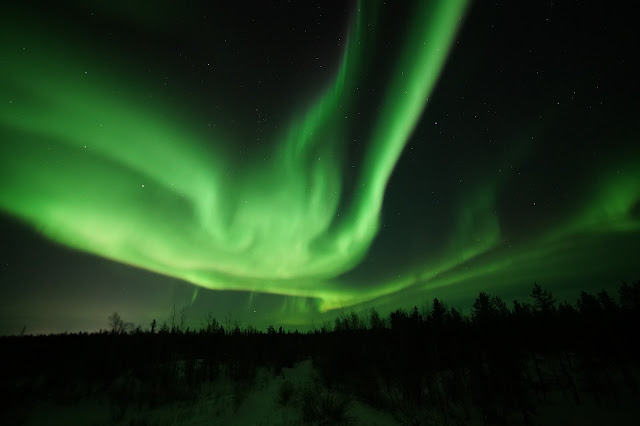 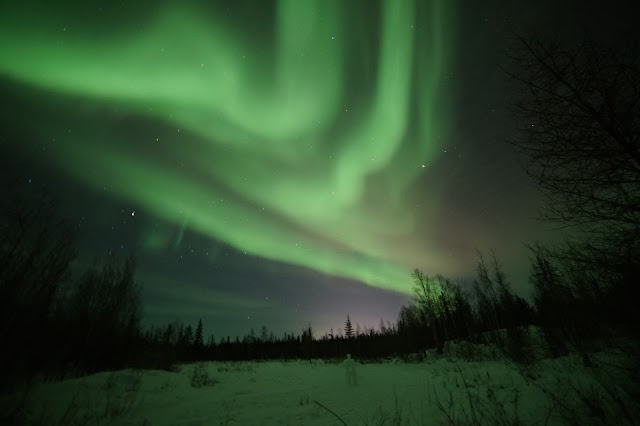 Overwhelmed by our incredible good fortune we spent over 4 hours in the cold night air (minus 20 Fahrenheit) watching in stunned admiration as the mostly green light kept changing the night sky. Luckily we were dressed for the occasion in specially designed thermal clothing, but was nice to get back to our hotel where we fell fast asleep after taking in all the fresh night air. 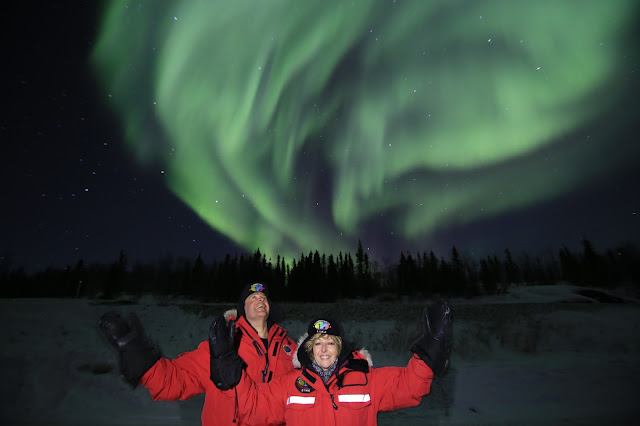 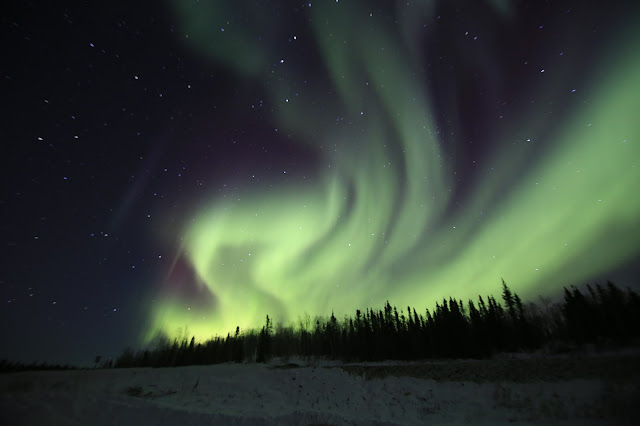 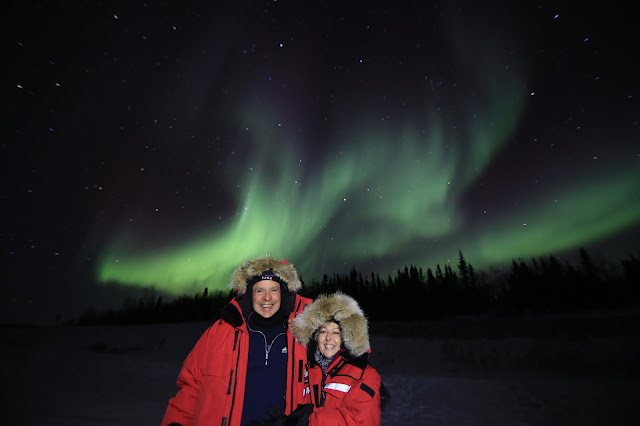 On the second night we were ready for another session under the stars but wondering how Ms. Aurora was going to top off her last performance. We need not have worried as once again the sky was lit up with yet another spectacular display of rapidly moving curtains of light. Northern lights are mostly green in colour caused by the interaction with oxygen at approximately 60 miles above Earth but they can also be purple at the edges and at an altitude of 200 miles they can be red. 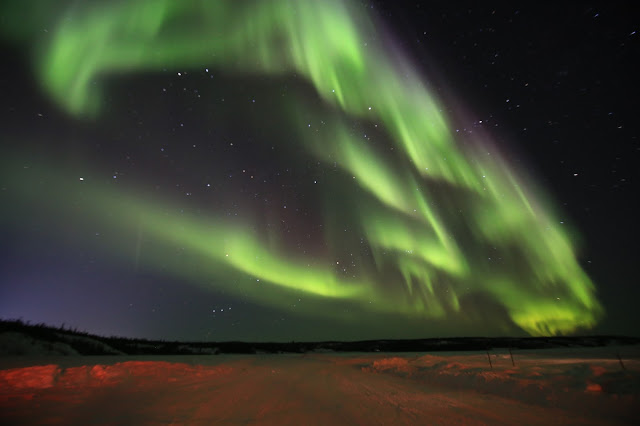 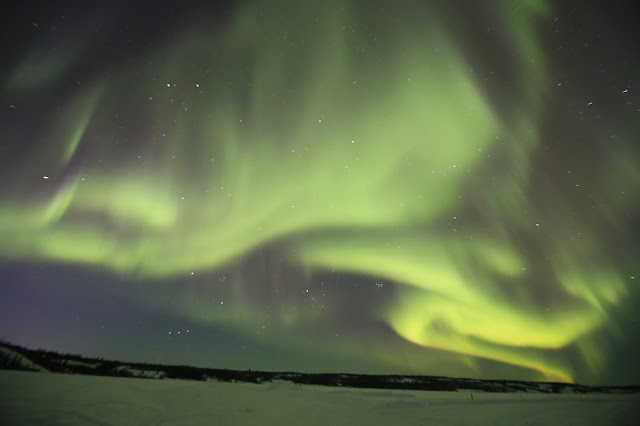 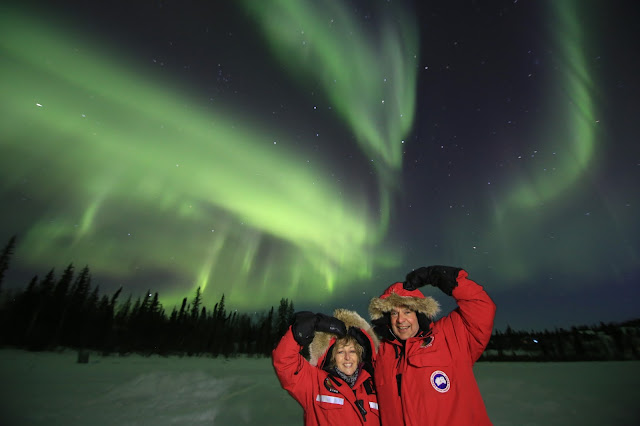 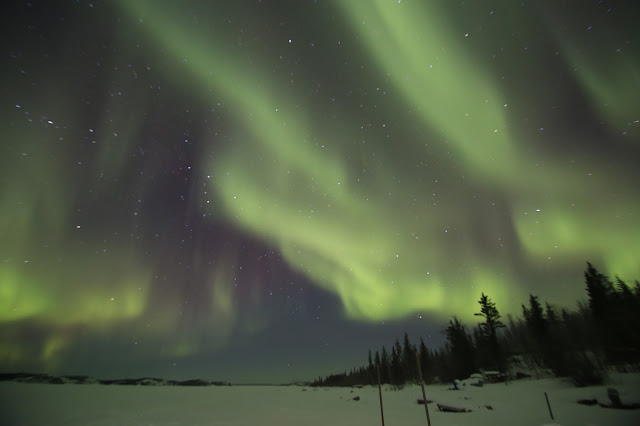 It's a long way from Vancouver to see the Aurora Borealis (even further if you want to see the Southern one called Aurora Australis) and people come from around the world (particularly Asia) where it's considered good luck if you see the lights.  There's never any guarantee but, when it does all come together, you feel very privileged. It's a national treasure and it's free, no wonder so many folks are beginning to see the light.

Posted by Nelson Quiroga at 3:28 PM No comments:

Bend Me Shape Me/ Under Pressure 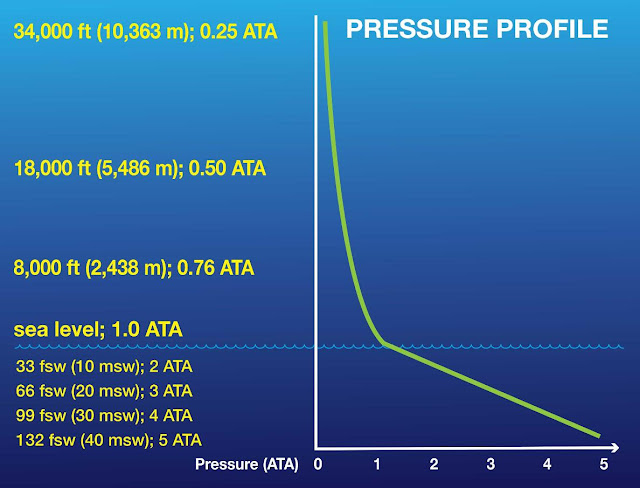 The one thing that affects all scuba divers, regardless of the water temperature, is pressure and the deeper they dive the greater is the surrounding pressure their body has to face.  At sea level the atmospheric pressure (ATM) is only 1 but every 10 metres or 33 feet deeper adds another ATM. The deeper you go the faster you consume your air supply because at 2 ATM you are inhaling twice the number of air molecules as you would at the surface and, at 4 ATM, or 30 metres deep, each breath is 4 times what you would at the surface. Understanding how the body reacts to all this pressure is the key to safe diving.

Pressurized air in a scuba tank still contains the approximate 79% nitrogen and 21% oxygen we are accustomed to breathing on land. However, during a dive, the body tissues are absorbing nitrogen in proportion to the surrounding pressure, which is anywhere from 2 to 5 times more than normal depending on depth. As the diver ascends and the pressure decreases the excess nitrogen will slowly leave the body (off gassing) but if the pressure is reduced too quickly the nitrogen will form bubbles in the tissues and bloodstream causing decompression sickness or what is referred to as the "bends". 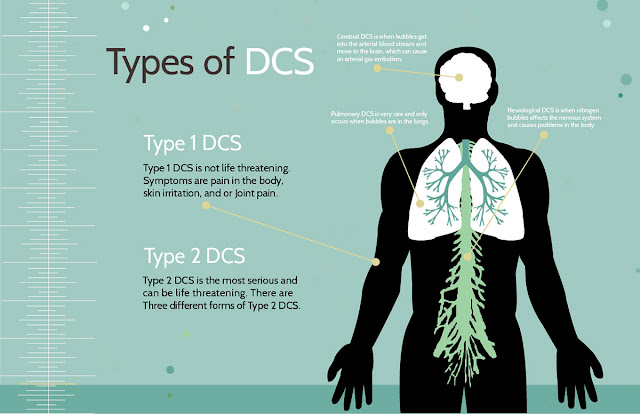 There are two types of decompression sickness (DCS) with Type 1 usually characterized by musculoskeletal pain in the joints and mild skin itching and rashes. Type 2 on the other hand is much more serious and life threatening as it can affect the lungs, spinal cord or brain and the symptoms include difficulty with bladder control, and numbness and paralysis in the legs. The only treatment for DCS 2 is hyperbaric oxygen therapy delivered in a recompression chamber. Getting the bends and having to go to the "Chamber" is every diver's worst nightmare.

Unfortunately for me I came down with DCS 2, following an otherwise very pleasant day of scuba diving in Howe Sound with my friends and the good folks at Sea Dragon Dive Charters this past weekend, and had to be taken by ambulance to the "Chamber" at Vancouver General Hospital. Luckily a hastily gathered team of 5 specialists were there to make me comfortable and put me through the standard regimen of being taken down to the pressure of 2.8 ATA, or 60 feet below sea level, and given pure oxygen to breathe for a session that lasted just over 7 hours.

As I sat in my chair watching movies I could feel the nitrogen slowly leaving my legs, and I happily began to regain all normal feeling, but I wasn't out of the woods yet. While I appear to have avoided serious permanent injury it will be 6 months before my recovery can be properly assessed and I may never be able to go scuba diving again. How and why the nitrogen built up to such an extent in my bloodstream is something I'm still examining from my dive profile, but there's no arguing with the physiology and the frightening power it had to bend and shape me.