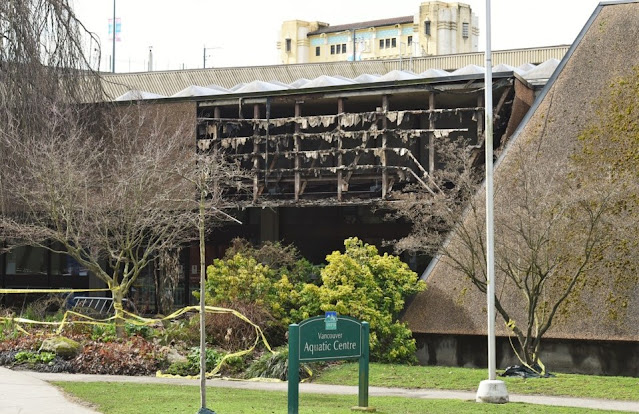 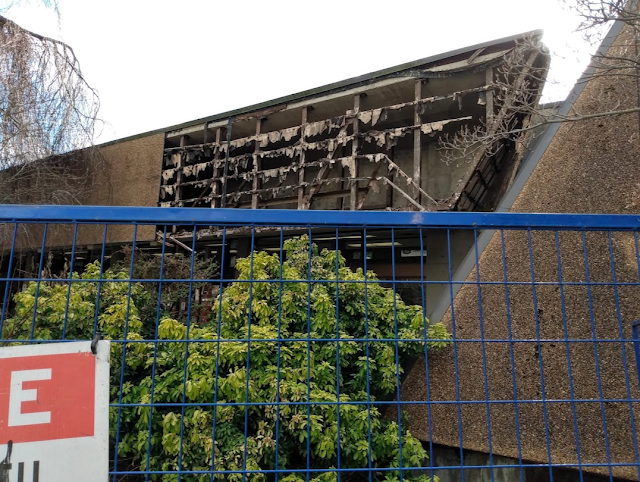 You could be forgiven if you thought the Aquatic Centre had been bombed or had suffered a fire or something the other day but no, it was just the rusted out facade that had suddenly decided to give way and crash to the ground. Luckily nobody was injured in the crash even though it was at the entrance to the facility. Built in 1974, the Aquatic Centre is 48 years old now and clearly showing its age. Of course being next to the ocean doesn't help with all the wind and salty air. Like all forces of Nature, mold, mildew, and rust never sleeps. 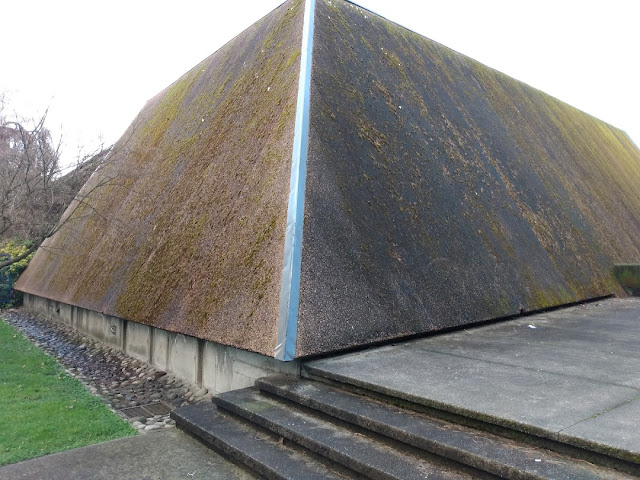 Seemingly held together by the moss and mould covering the exterior, you would think that for appearance sake, not to mention maintenance, the Parks Board would power wash the building once in a blue moon. They might even want to give it a coat of white paint while they're at it to try and lighten up its Stalinesque neo-bunker appearance. It's not that we have a shortage of water in these parts. 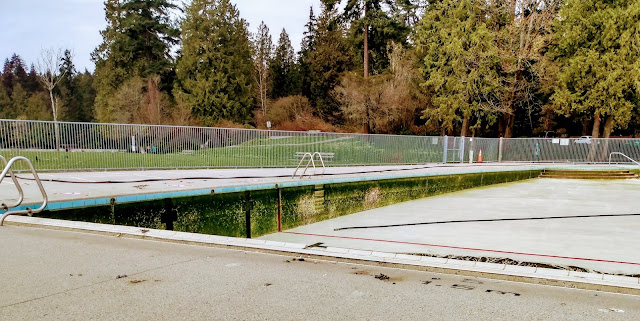 At least the pool at 2nd Beach is getting a nice spring cleaning in preparation for what will be a very busy upcoming summer. The even more popular Kits pool won't be opening after all the damage it sustained during a nasty storm this past winter that flooded the pool, and repairs haven't even started yet. So 2nd Beach will have to do double duty for Vancouver residents even though there is very limited parking for them thanks to the Parks Board obsession with bike lanes. They will be even more surprised to find there are no proper showers, change rooms or lockers either even though they have been promised since 1995 when the pool was first built. There aren't any showers, change rooms, or lockers at English Bay either. 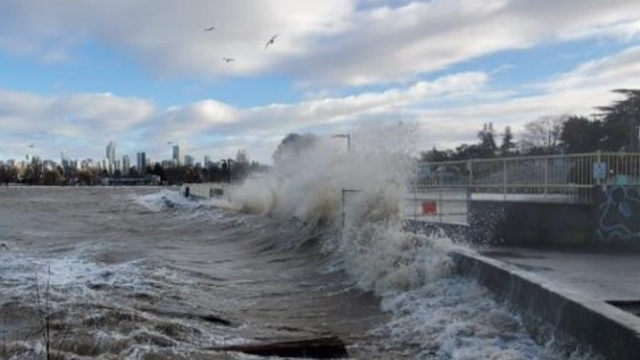 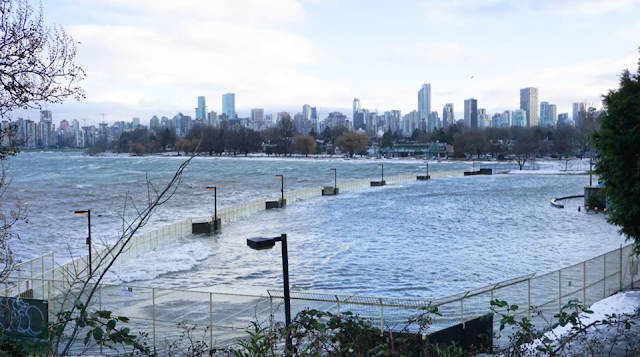 The winter storm didn't just damage Kits pool, it did serious damage to the seawall as well. This is another critical piece of the City's beachfront that is fighting a losing battle with the forces of Nature. Every winter the damage gets worse, the repairs more costly, and a longer term solution postponed. 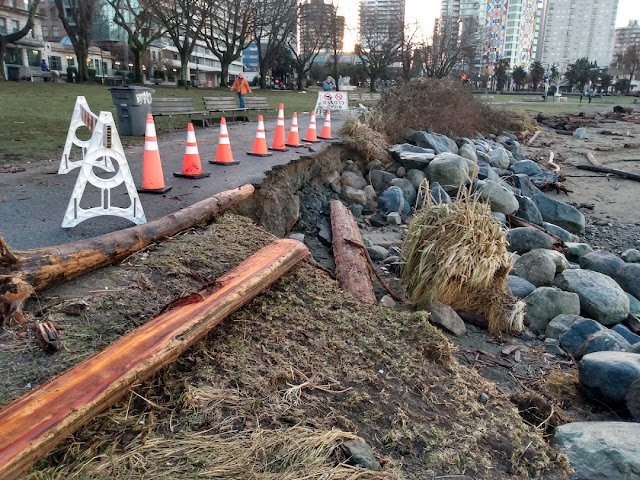 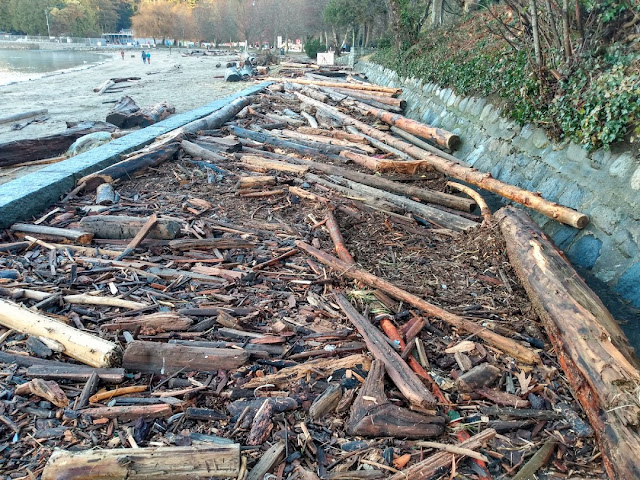 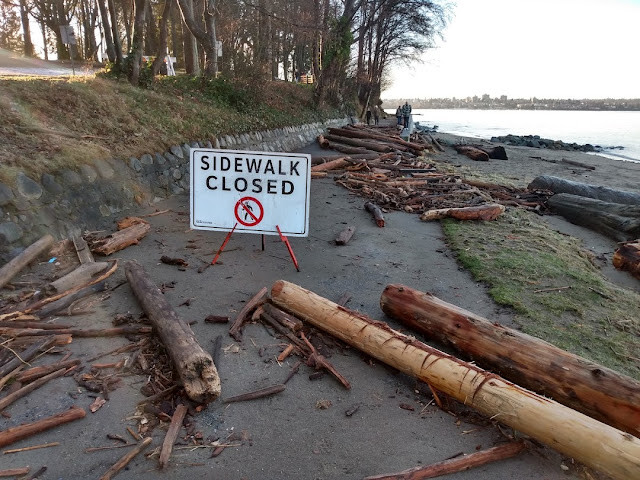 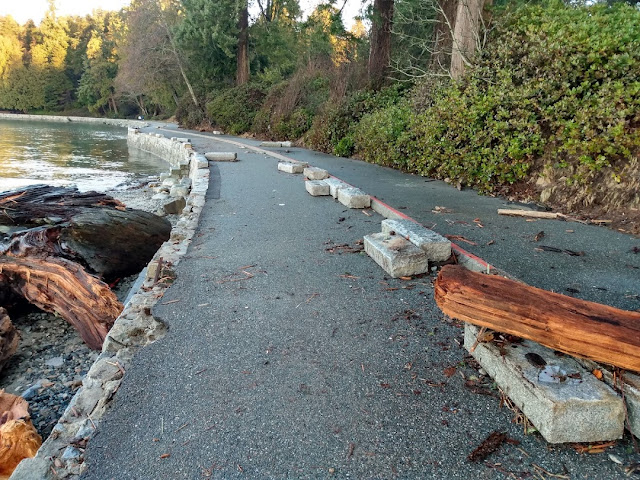 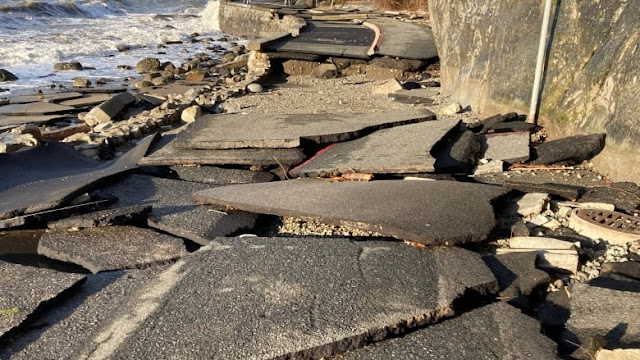 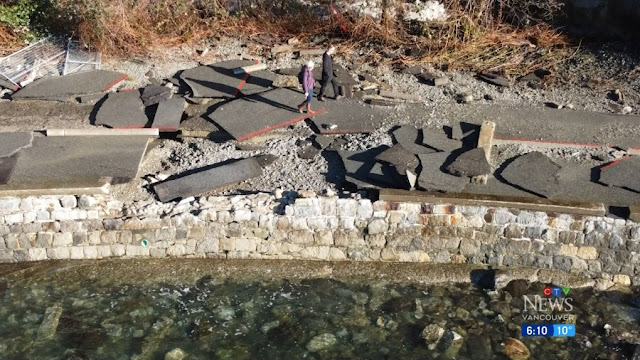 The logs and debris that comes in from the ocean and covers the beaches is endless. The clean-up crew has a full time job just trying to keep up with the mess on some of the main beaches around English Bay. And that doesn't even count the litter and trash left by people addicted to junk food and take away beverages and the disposable containers they come packaged in. 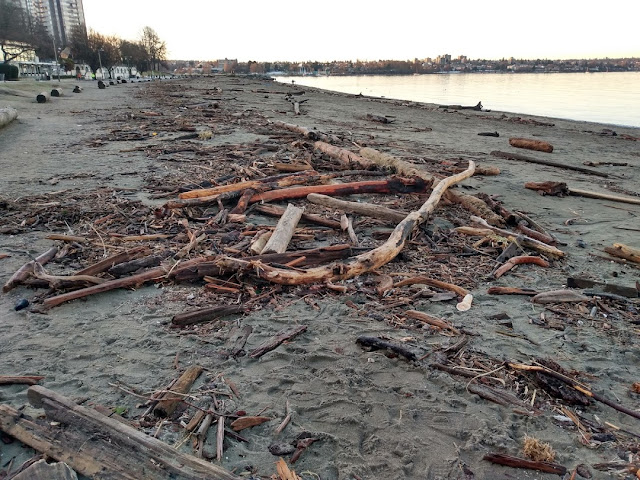 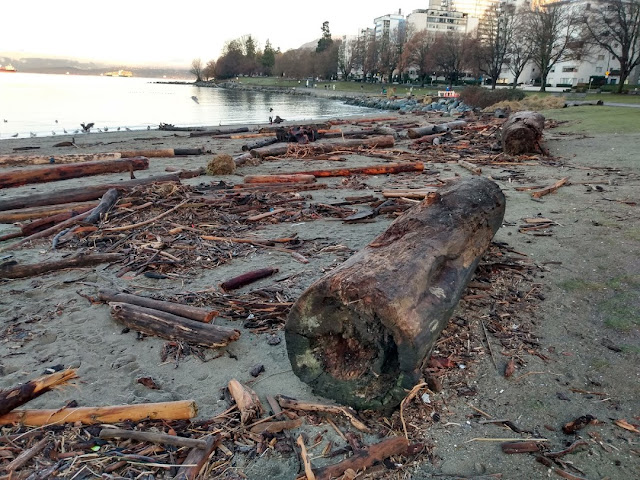 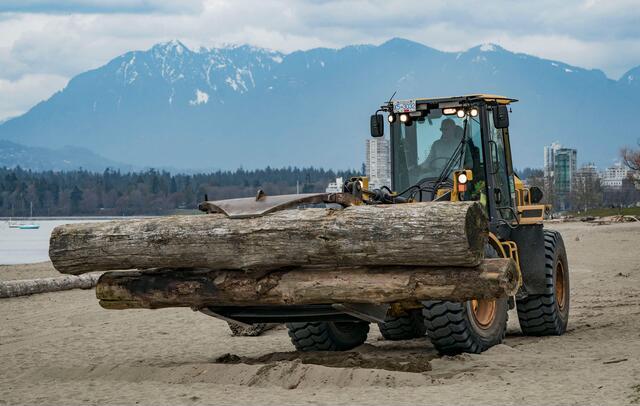 Oh and did I mention rain? Yes it occasionally rains in Vancouver and guess what we don't have any culverts, drains, or anything else to deal with the run-off so it just pours down the sidewalks and either pools there or washes away sections of the beach. 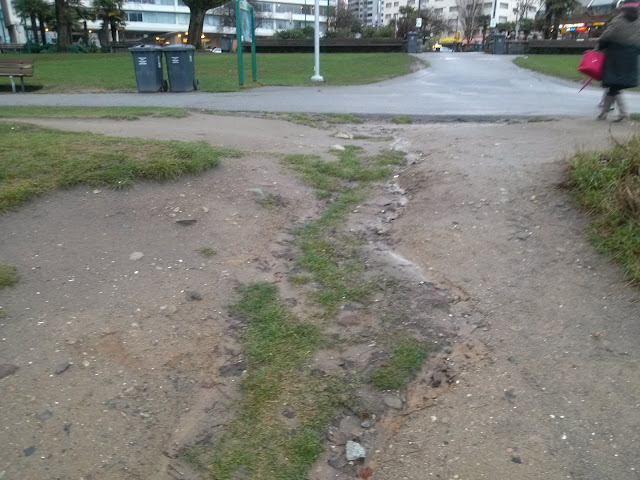 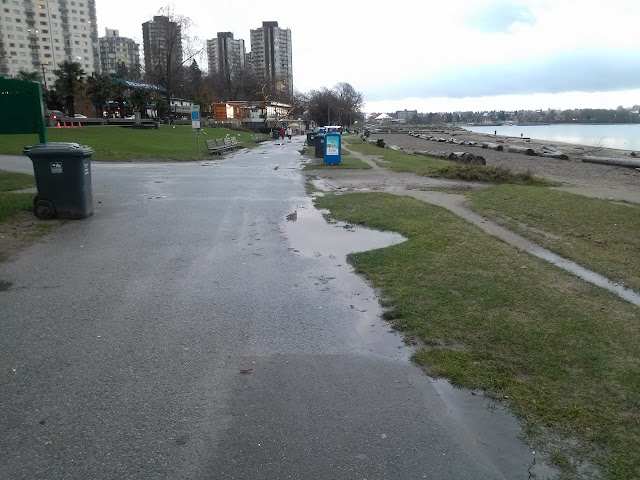 The cherry on top of all this mess of course is the stupid barge that nobody can figure out how to remove. Caught on the rocks of a breakwater that was installed to absorb the force of incoming waves and slow the rate of erosion it sits there as yet another testament to the hopelessness of trying to fight Mother Nature.

Walking along the seawall from the Burrard Street bridge to Stanley Park should be a lovely experience but instead it's a dreary litany of decaying buildings, poorly maintained walkways, and substandard swimming facilities. If it wasn't for the beautiful flower gardens around English Bay it would be truly depressing. Every year things keep getting delayed until finally it all starts to fall apart. If we really want to get the most out of the fantastic location our city is in, then we're going to have to spend a lot more money and be a lot more creative in how we approach our beachfront infrastructure and the facilities we need. Blame it on climate change, global warming, or anything you want but it's all Nature's way and we have to accept it and move forward.
Posted by Nelson Quiroga at 9:59 AM