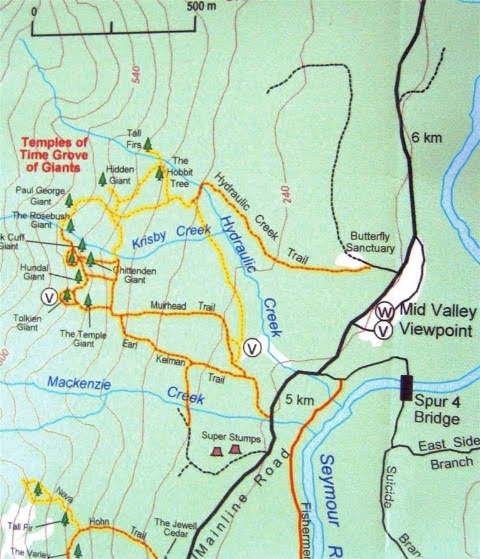 Recently my hiking group decided to check out the "Temple of Time Grove of Giants" that have been found in the Seymour Valley. These are a collection of Douglas-fir trees that somehow survived the logging in this area 100 years ago and now tower above the second growth hemlock trees that dominate the area. Guided by an old Western Canada Wilderness Committee map fragment that had been posted on the Internet we set off to find these ancient witnesses to the North Shore's history. 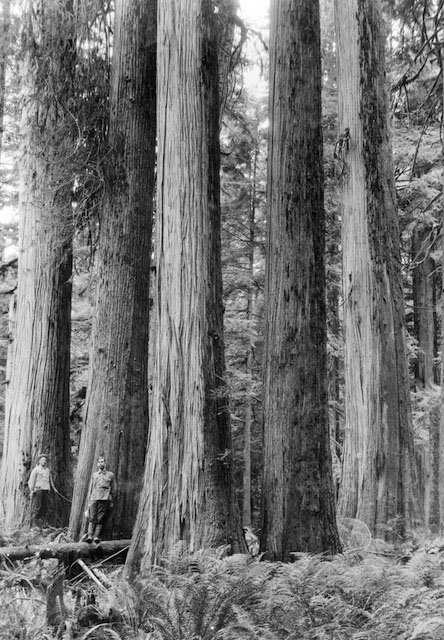 The old-growth rainforests of the Pacific Northwest are a mixture of tree species dominated by giant Sitka spruce, western red cedar, hemlock, and Douglas-fir that were hundreds of years old. In 1903 the Hastings Shingle Manufacturing Company set up two mills in the Lynn Valley area due to the abundance of western red cedar growing in the Seymour Valley. Employing simple logging technology they used springboards to get above the butt swell of the cedar trees and cut them down using axes and cross saws.  Trees were bucked and limbed on site and then dragged along skid roads to the mills. 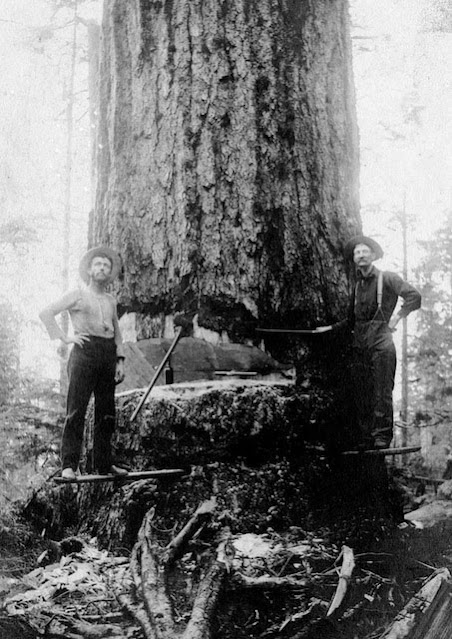 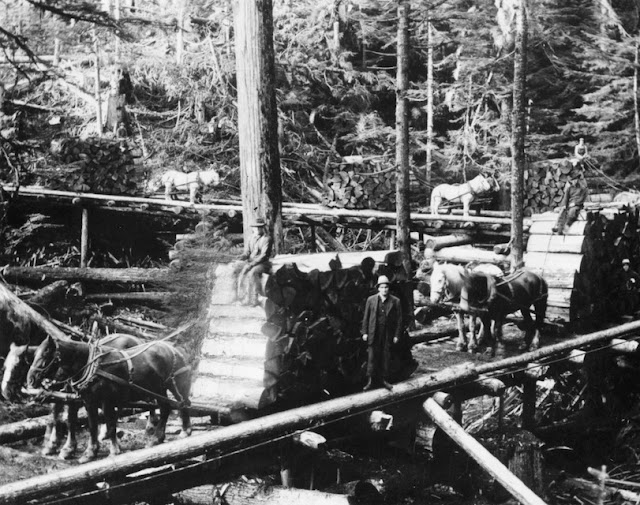 The logging was very selective, with only the best cedar trees taken and other species were left behind. As a result, the Douglas-fir in this particular area continued to grow and in the 1980's were discovered by the tree hunter Ralf Kelman who also campaigned to save them. But it wasn't until 1994 that logging was finally halted in the Seymour Demonstration Forest and the plan to cut down the Temples of Time Grove was shelved. It took until 2002 before logging in all of Greater Vancouver's watersheds was stopped. 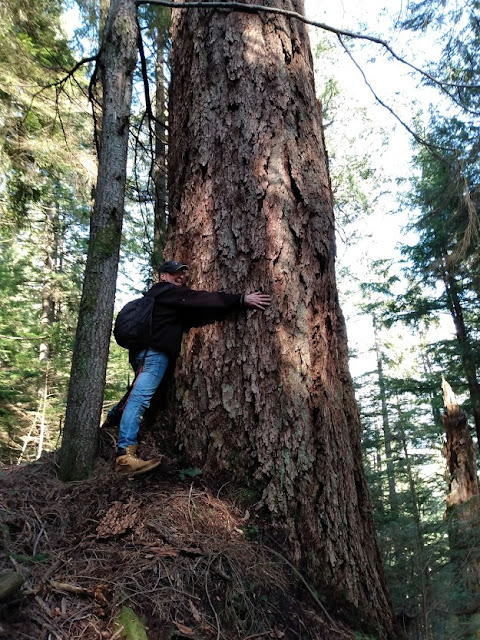 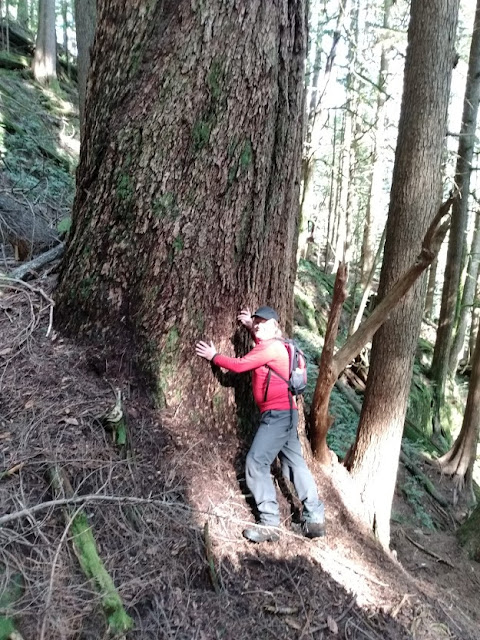 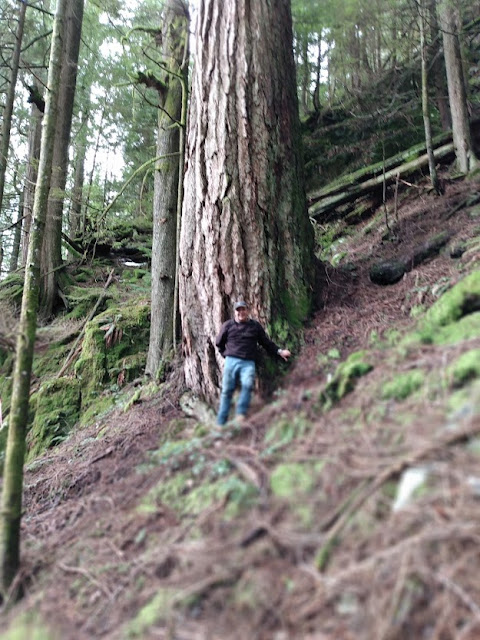 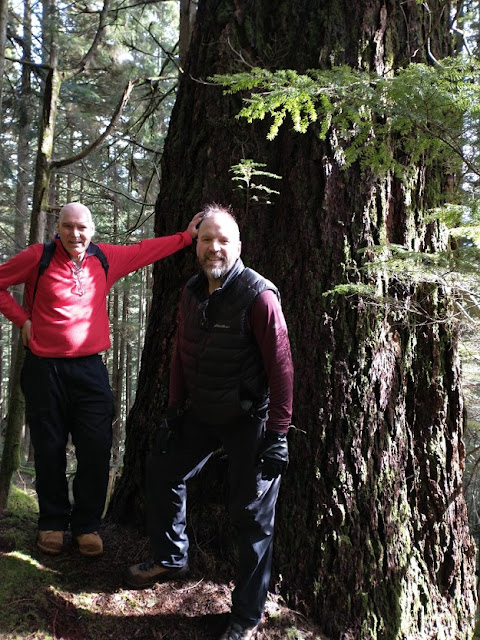 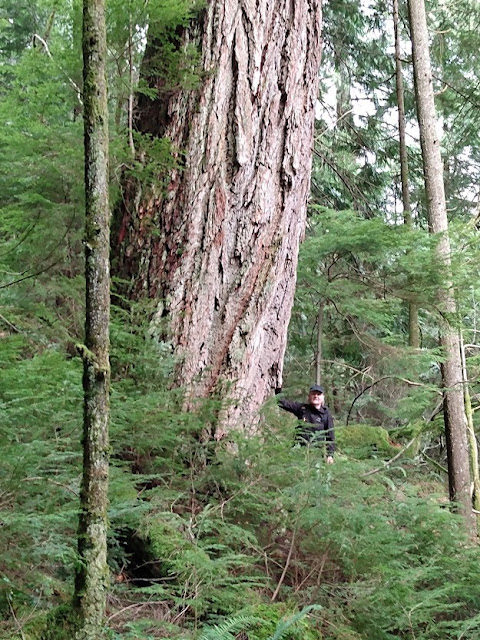 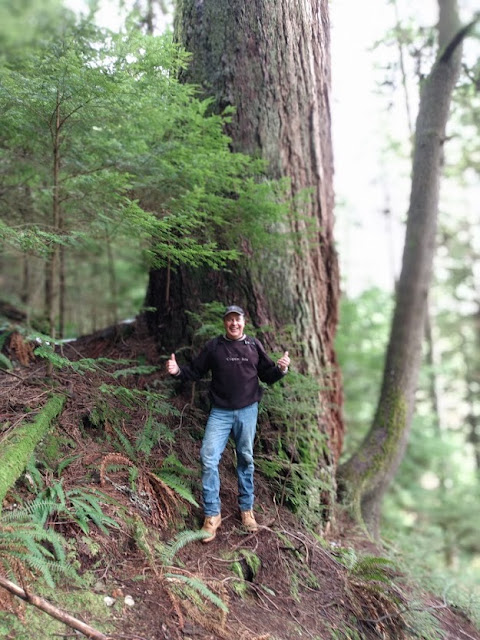 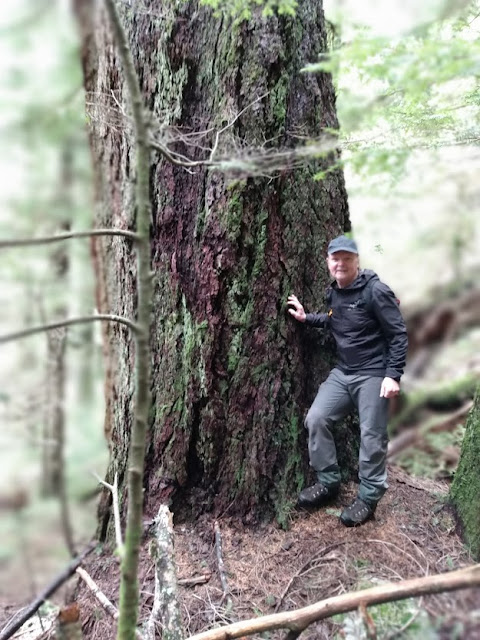 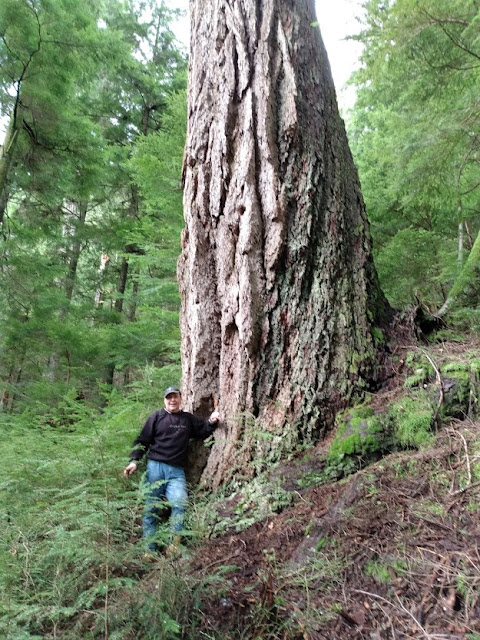 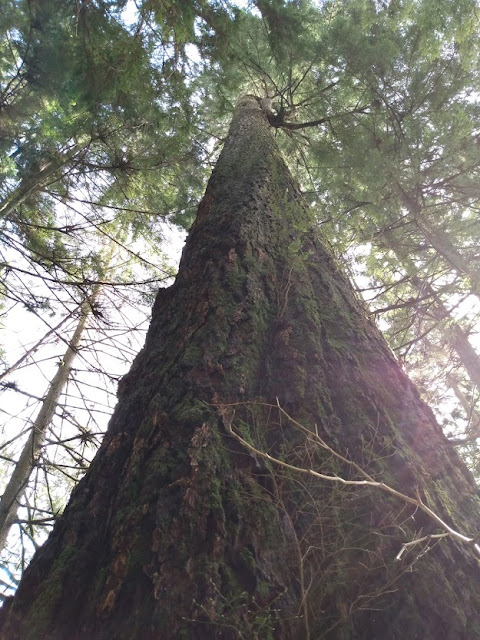 After a couple of hours of hiking we came across them and it was amazing. Encountering these giants stretching hundreds of feet into the air that are so big in circumference it took all of us putting our arms together to try and encircle one of them was truly awe inspiring. It's even harder to imagine a forest filled with trees this size. Such magnificent organisms and it's sad to think in the old days we cut them down without any thought. 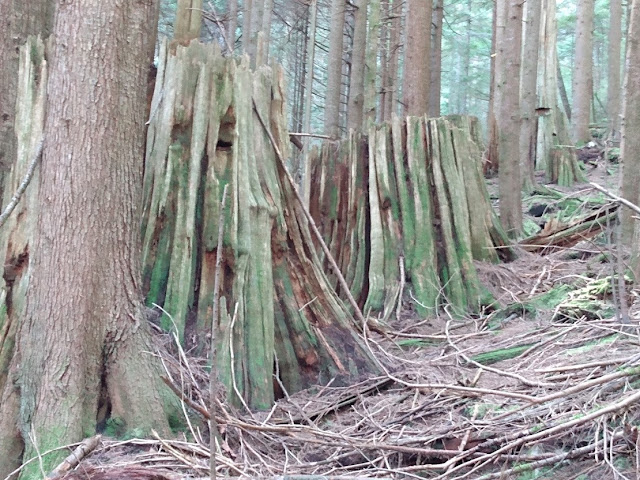 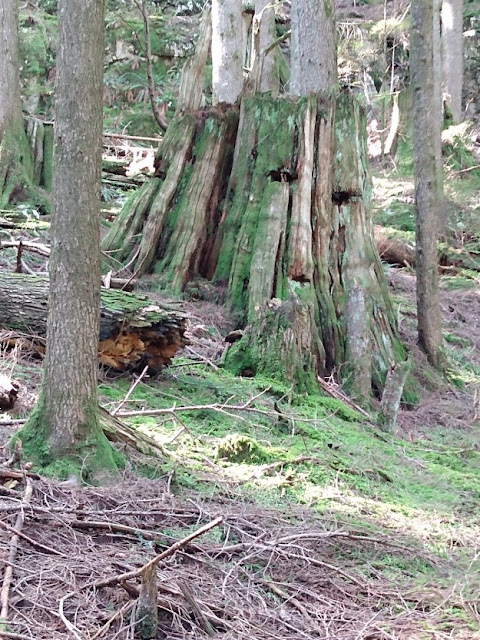 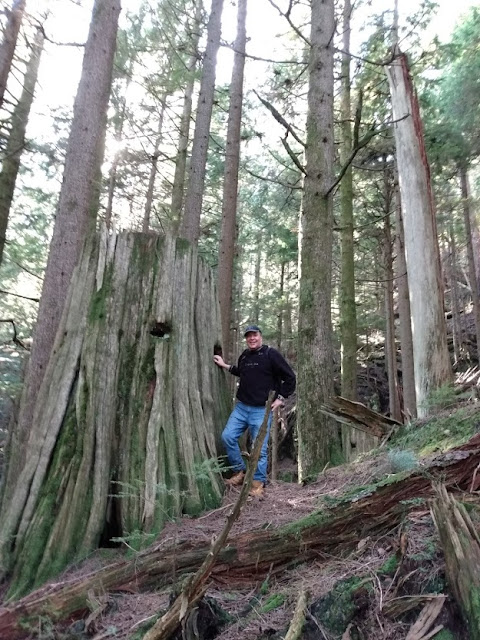 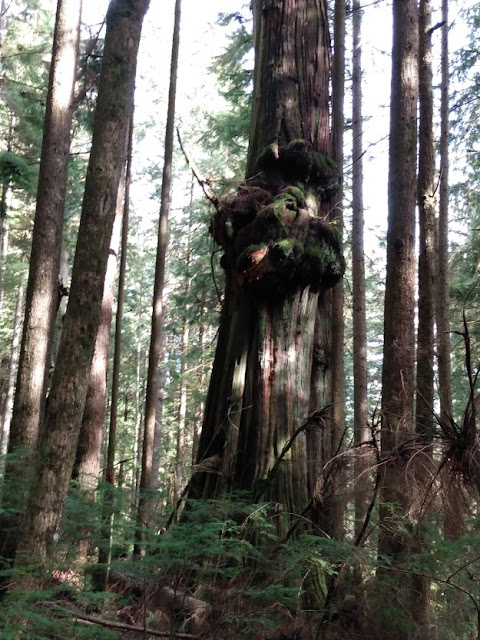 Equally impressive are the old cedar stumps with their springboard notches that stand like tombstones in the new forest growing around them. The hard labour that went into cutting them down is also hard to imagine. It will be a long time, if ever, before anyone sees cedar trees like that again though there are still a few misshapen ones that were left behind to give us some idea. 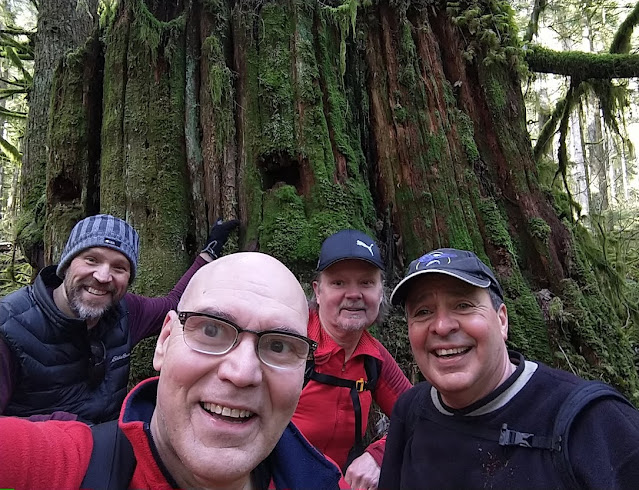 Only the Redwood and Giant Sequoia trees in California are bigger and taller than the trees in the Pacific Northwest. Western Red Cedar grows to well over 200 feet in height and up to 20 feet in diameter and Douglas-fir to over 300 feet in height and 9 feet in diameter and these trees can live for over a 1,000 years. Life doesn't get any bigger than these trees and what a unique pleasure it was to get up and close with them.
Posted by Nelson Quiroga at 10:57 AM