The Air That I Breathe

One of the most important parts of swimming, and perhaps the most critical, is the breathing. Developing good breath control is key to staying calm, being able to fine tune your stroke and maintaining any sort of pace.  Of course if you go under water you have to be able to hold your breath and, if you want to stay under water for any length of time, you will need SCUBA gear. (Self Contained Underwater Breathing Apparatus)

On a recent dive I had a rather close call owing to my scuba gear failing and, for the minute or so that I had to rely on the remaining air in my lungs until I was able to join up with my dive buddy and access his air supply, I truly wished I could simply breathe under water like the fish do.  All the other marine mammals like whales, dolphins, and seals have evolved ways of holding their breath for extended periods of time but the fish simply filter out the dissolved oxygen that's already in the water using their gills. 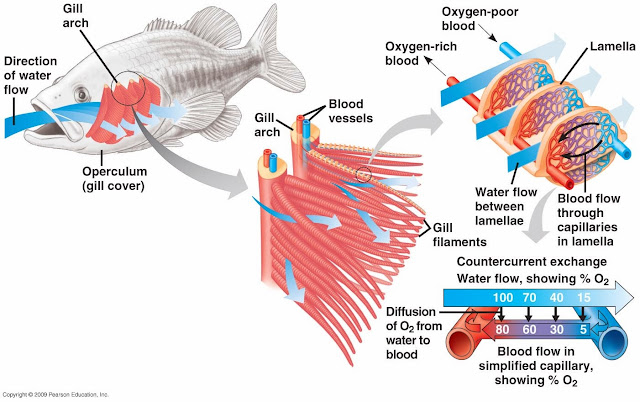 An important distinction needs to be made here between the water molecule H2O which contains chemically bound hydrogen and oxygen atoms that can't be easily separated except by electrolysis, and oxygen gas from the atmosphere that has dissolved into the water. Oxygen gas from the atmosphere is added to the ocean water by the mixing action of wind and waves and, as a by-product of photosynthesis by the plankton. Conversely, oxygen gas is depleted from the ocean by the fish who extract it using their gills. 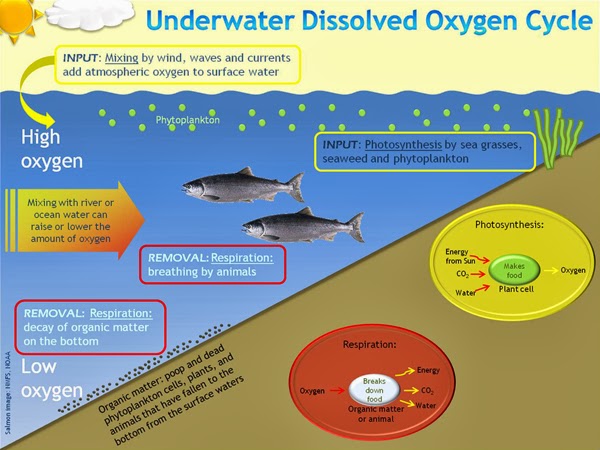 There are a number of variables that affect the amount of dissolved oxygen in any given body of water such as temperature, depth, and salinity and of course the amount of plant life, which means the amount of oxygen can range from 0 - 20 parts per million (ppm) but on average is 7 ppm. This means that for every 1,000,000 kg of seawater there is only 7 kg of pure oxygen. However if that's enough for the fish to breathe surely all we need is some sort of artificial gill to do the same thing? 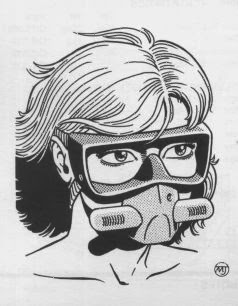 Unfortunately it's not that simple.  First off fish are cold blooded which means they have a much lower metabolism than us warm blooded humans, and that in turn means we need a lot more oxygen. With the average diver needing to breathe 1 litre of oxygen per minute, and the dissolved oxygen count of ocean water being only 7 ppm this works out to 192 litres of seawater a minute that would have to pass through any human operated gills in order to get out the necessary amount of oxygen.  (A litre of seawater weighs approximately 1 kg. and a litre of oxygen weighs approximately 1.4 grams if you want to do the math yourself)

Another way of looking at this would be like trying to swallow a 45 gallon barrel of seawater every minute which is not only very impractical it's also not very efficient.  An Israeli company called Like-A-Fish has tried to develop a more efficient method with a device that uses a high speed centrifuge to lower the pressure of seawater and let the oxygen escape into a storage bag for a diver to breathe.  This process however, requires considerable battery power to function and a lot of complicated equipment so for now it's more practical to stick with the proven technology of standard SCUBA gear.

It was only 70 years ago that Jacques Cousteau and Emile Gagnan invented the first underwater breathing device which was called the Aqua-Lung and since then there have been many refinements, variations, and improvements. While we may have crawled out of the ocean thousands of years ago in our evolutionary past, we are still drawn back if for no other reason than 3/4 of the planet is covered with water. Eventually I'm sure someone will come up with an even more clever type of SCUBA gear that mimics what the fish can do but in the meantime the air that I breathe will just have to come from outside of the water.