Sockeye On The Run

The biggest story this past summer has to be about the 35 million Fraser River sockeye salmon that appeared without warning from the depths of the Pacific Ocean, the largest run since 1913.  Even as I was going for my morning swim in English Bay the salmon were jumping out of the water.  Originally presumed missing in action by the Department of Fisheries & Ocean, which has done everything in its power over the years to mismanage fishing stocks on both the Atlantic and Pacific coasts, it was a pleasant surprise for the commercial fishery, the first nations, and the general public to suddenly have all this wonderful fish available.  Sockeye, of course, being the most prized of the 5 indigenous salmon species (Coho, Pink, Chinook, & Chum being the others) due to its rich flavour and firm, deep red flesh.


Like all salmon, the sockeye have a well established fresh water/salt water life cycle that starts with the eggs hatching in some fresh water stream, the juvenile smolts eventually making their way to the open ocean to feed and grow and then return, as mature adults 4 years later, to spawn in the exact same spot where they were born, before dying.  In the case of sockeye this cyclical migration can be thousands of miles from spawning grounds to feeding grounds and, how they find their way back and forth, is probably one of nature's most enduring mysteries. Some annual cycles are larger than others however, with 2010 being part of the most dominant 4 year cycle for the Fraser River, the largest salmon river in the world.  In 2006 this same cycle saw 13 million sockeye return to the Fraser River, but there is a big difference between 35 million and 13 million and an even bigger difference when one considers the less than 1.5 million sockeye that returned last year.


When the less than 1.5 million salmon returned last year alarm bells immediately started ringing.  Overfishing, sea lice, too many marine mammals, and climate change were cited as the most likely culprits and many declared the sockeye was on the verge of being wiped out. But if that was the case how do you explain all the fish this year?  In the world of fish it's either eat or be eaten.  An estimated 10 billion salmon smolts of all species enter the Gulf of Alaska every year and, while they suffer a heavy mortality rate, the millions that survive the gauntlet of predators is truly astounding.

During their time in the ocean sockeye salmon feed off plankton and tiny shrimp.  If climate change had affected the ocean it must have led to more plankton and shrimp being produced because obviously the sockeye had no shortage of food. Alternatively the predators that eat salmon might have disappeared but it would appear the seals, sea lions and orca whale populations are all on the increase so that isn't the answer either. It's also unlikely the sockeye have developed an immunity to sea lice, considering they have been around for as long as the salmon themselves so, as nasty as they are, the speculation over sea lice from fish farms doesn't really seem to have any substance.  And with the annual fishing quota being steadily reduced it doesn't seem like overfishing was the culprit this time.  More questions than answers.

It all goes back to what happens during that 2 year period the sockeye are in the ocean with no babysitters, GPS tracking sytems, or video cameras watching their every move.  Teenage wildlife with no responsibilities or restrictions.  An all too brief time to bond with friends, eat and drink to their hearts content, and travel wherever the current leads them.  What goes on the road stays on the road and the kids aren't talking.
But what to do with all these fish?  It seems like feast or famine.  Normally selling for anywhere between $10.00-$20.00/lb in the market, now whole sockeye were being sold for $20.00 or less right off the boats.  With hardly any canneries even operating anymore everyone was scambling to find a way to unload the catch and restaurants everywhere had salmon specials on the menu.  But all of this is only affects a fraction of the fish, with the majority being left alone to try and spawn.  Critics are now saying the spawning channels are overcrowded and most of the fish will simply die, a colossal waste of fish. 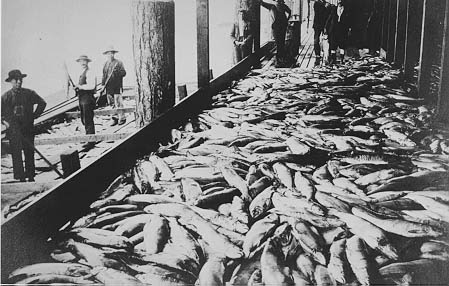 It wasn't always that way.  In the late 1800's the canning industry came to the Fraser River.  Perfect timing as it turned out with a unique combination of events.  The fur trading posts at Prince Rupert and Fort Langley were closing down just as canneries were being established to replace the previous method of packaging fish by simply salting the salmon in barrels.  With the great CPR railway construction project completed there was lots of surplus labour, mostly Chinese, to work in these very labour intensive factories.  In 1871 the canning industry was launched by Alexander Ewen with 2,000 salmon hand filled into 300 cases of hand soldered cans.  By 1880 42,000 cases were filled and 126,000 cases the next year.  The race was on.

Canneries started proliferating and soon there were nearly 100 canneries between the Fraser and Skeena Rivers. With the seemingly endless supply of fish in B.C. it was a license to print money but, over the next 100 years, the industry would be in constant conflict with competing claims for the fish by Natives and  fishermen, labour disputes for better working conditions and wages at the canneries and racist government policy towards the Chinese and Japanese that culminated in the confiscation of Japanese fishing boats during the Second World War Internment.

﻿﻿From the beginning it was evident the amount of fish being harvested was unsustainable but, instead of practising conservation or some form of restraint, the industry simply went after other fish including the other salmon species as well as herring and halibut.  Almost exactly 100 years from when the salmon fishing industry got started, it collapsed.  Canneries were amalgamated and closed, fishing vessels were mothballed, their licenses sold back to the government, and the farming of Atlantic salmon took over.

For the sockeye, however, it wasn't the fishing industry that had the biggest impact.  In August 1913 blasting by the CNR caused a landslide at Hells Gate in the Fraser River that destroyed one of the largest ever salmon runs trying to make its way upstream.  Millions of fish died before getting to their spawing grounds and, by 1921, two cycles later, the sockeye industry was dead.  It would take another 100 years to recover.
﻿﻿
﻿﻿ ﻿﻿﻿
﻿﻿  ﻿﻿
﻿So now its August 2010, the sockey are back and we are hopeful that the last 140 years of greed, mismanagement, and folly can somehow be repaired.  That a species with a history probably older than ours can get back to its routine again in spite of everything we've done to disrupt it.  The arrogance of thinking we can "manage" something we know so little about is almost more astounding than the 35 million sockeye who appeared this summer out of nowhere.  But it's a great year in the spawning grounds and, at least for today, there's plenty to spare for us to eat as well.  It could always be that way if we are just a little more careful.
Posted by Nelson Quiroga at 11:08 PM