Boom Boom Out Go The Lights 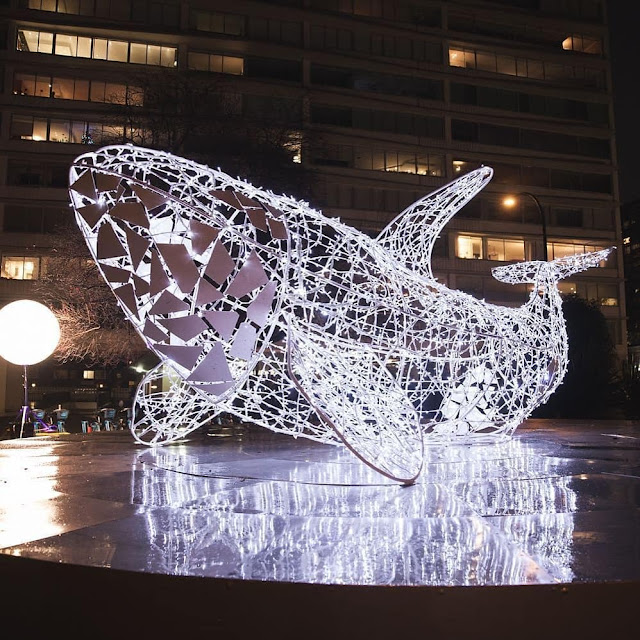 Luna the Whale
Once upon a time the West End was a dark and dreary place as the days grew shorter and the winter season began. But in 2015, in a tribute to all the whales living in the waters around Vancouver, Luna arrived to brighten things up by sporting over 6,000 LED bulbs in a magnificent display of artistic genius. Created by the folks at MK Illumination, Luna was an immediate hit with the neighbourhood and, during the course of his winter sojourn, thousands of photographs were taken. 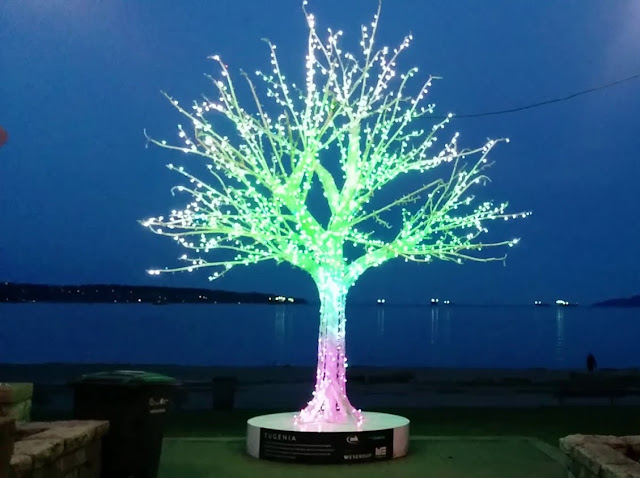 Eugenia the Oak Tree - photo by Junie Quiroga
In 2017 the MK folks added Eugenia the oak tree that plays homage to an oak tree that decorated the English Bay skyline for 30 years on top of the Eugenia Place residency. Lit up with 7,600 mini LED lights that are constantly changing colour Eugenia provided a magical entrance to the seawall. 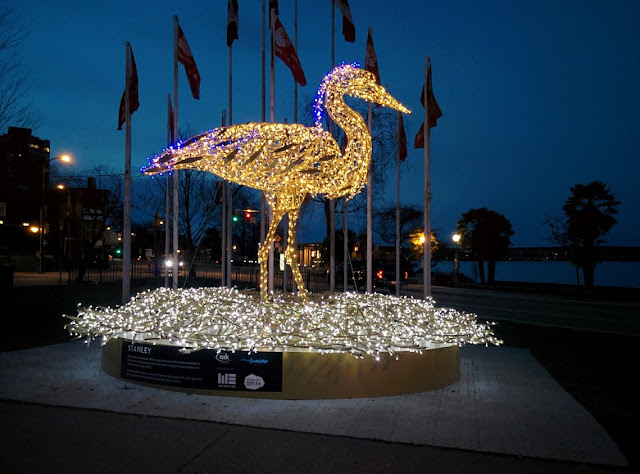 Stanley the Heron - photo by Junie Quiroga
In 2018 Luna was joined by a new friend named Stanley the Heron. With nearby Stanley Park home to one of North America's largest colonies of blue herons this MK creation was a perfect match and, standing 13.5 feet tall with over 10,000 LED lights, he gracefully lit up another section of the area around Morton Park. 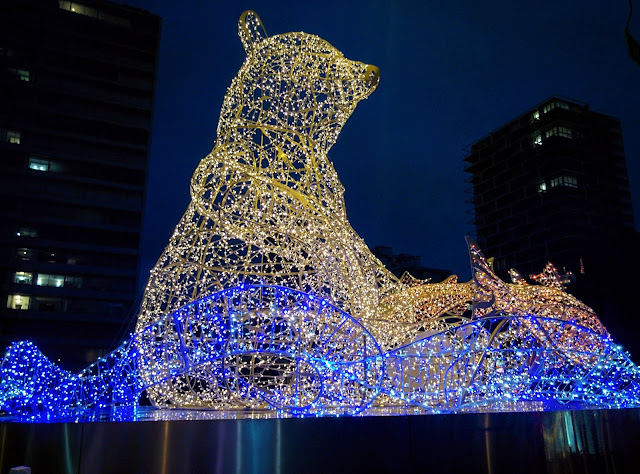 Davie the Bear - photo by Junie Quiroga
In 2019 MK Illumination really knocked it out of the park with a 24 foot tall Grizzly Bear named Davie who was lit up with more lights than anyone could count. While there aren't any grizzly bears in the Vancouver area anymore, the sculpture hightlighted the magnificence of these creatures and the need to protect them in their wilderness habitat. 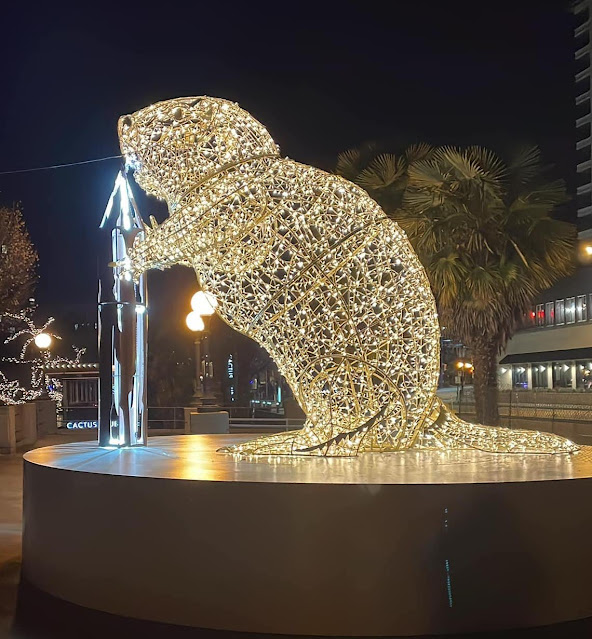 Barclay the Beaver
In 2021 came Barclay the Beaver, all 12 feet of him happily chewing his way through a piece of crystal and reminding everyone of who Canada's national symbol really is. There are two beaver colonies in Stanley Park, in Beaver Lake and Lost Lagoon and, just like Barclay, the best time to see them is at dawn or dusk. 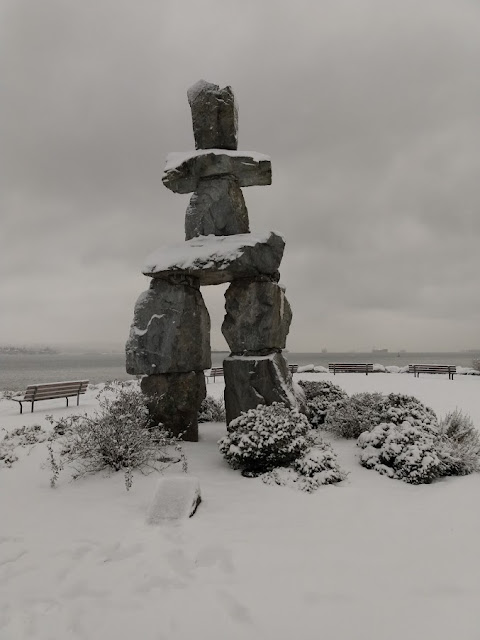 But then something strange happened. After 7 years of enjoying all these light installations suddenly, without any warning, in 2022, they all disappeared. Not only were there no new creations, the old ones had been taken away somewhere and there was no public explanation. After submitting an inquiry to MK Installations I was directed to the West End Business Association who explained that costs to maintain, store, set-up and take down these iconic displays had gotten too expensive and they couldn't afford to continue. Apparently the old Parks Board (who thankfully have been kicked out of office) didn't want to contribute to sharing the cost and considered the fact they allowed the installations to be placed on Parks territory enough of a contribution. The West End was plunged back into the dark ages just as we were entering a very cold winter. 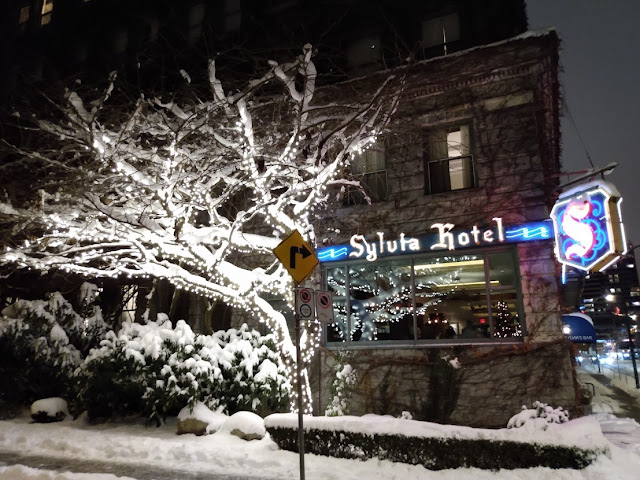 So while the heart of the West End is no longer lit up with festive creatures and folks are once again forced to stumble around in the darkness, thankfully there is one tiny beacon of light to guide them. This of course would be the Sylvia Hotel where the lights are always on and warm cheer can always be found no matter the weather or the Scrooge like behaviour of the Parks Board. When the lights go out everywhere else, at least there is one place you can still count on.
Eug
Posted by Nelson Quiroga at 3:51 PM