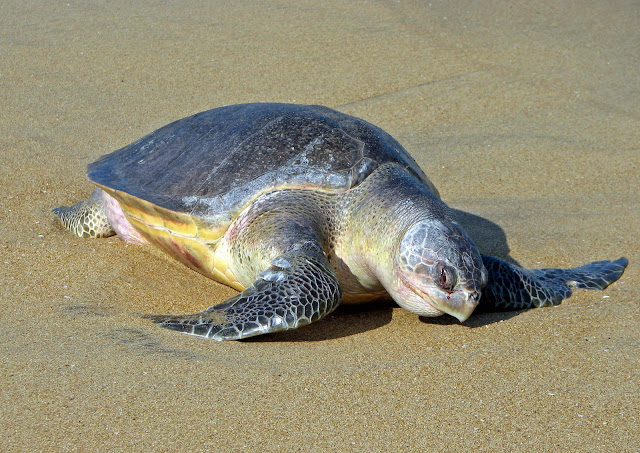 On a recent holiday to Mexico, my wife and I had the opportunity to participate in a fascinating turtle release conservation project. There are 7 different types of sea turtles in the world; Green, Loggerhead, Kemps Ridley, Hawksbill, Flatback, Leatherback, and Olive Ridley and all of them are endangered. In many parts of Mexico there are efforts being made to protect and improve the status of these turtles, and approximately 50 km. up the road from Zihuatanejo, located on a deserted stretch of beach, was the turtle camp we were introduced to that was focused on the Olive Ridley Turtle. 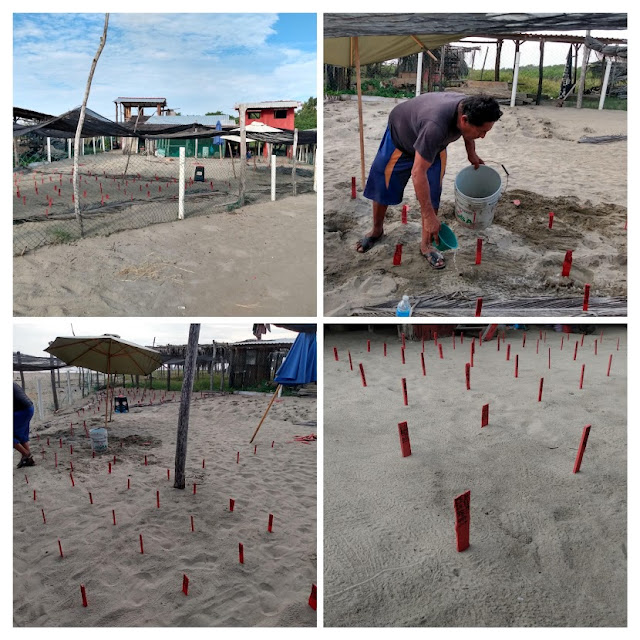 Female sea turtles return to the beach where they were hatched, to lay their eggs each year and, while in this part of Mexico nesting occurs throughout the year, peak nesting is between September and December. Nesting occurs at night when the female comes on shore and laboriously digs out a 1.5 feet deep nest with her hind flippers and deposits approximately 100 eggs. To save the eggs from predators, Felix, a tireless volunteer who had made his home on this stretch of beach, patrols the beach and carefully collects the eggs and re-buries them in carefully marked nests that are fenced off and kept shaded and watered to maintain the optimum temperature. Eggs incubated at temperatures of 31-32 degrees Celsius produce only females, eggs incubated at 28 degrees Celsius or less produce only males and eggs incubated at 29-30 degrees Celsius produce a mixed sex clutch. 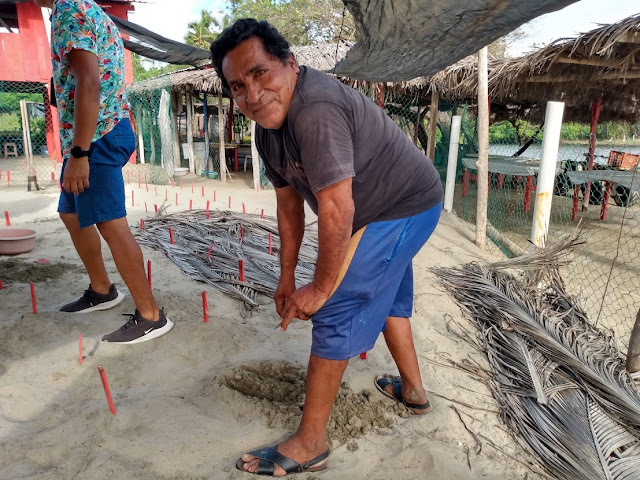 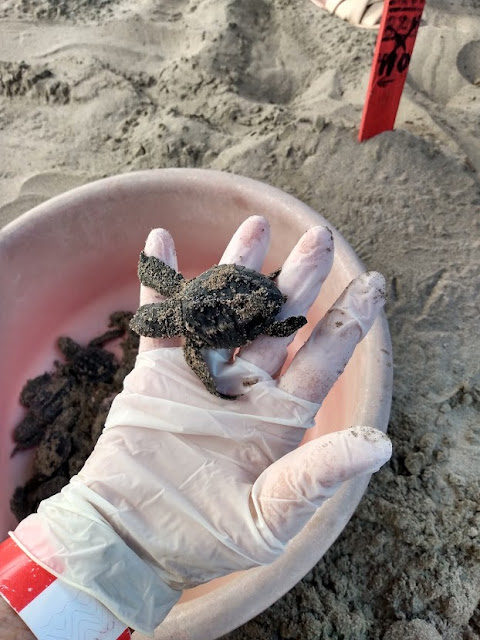 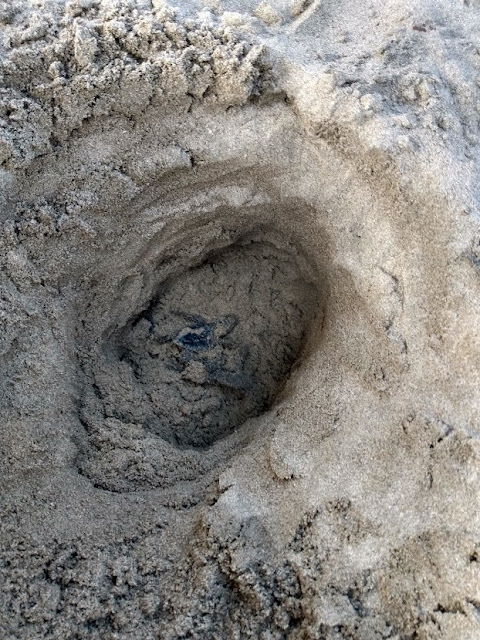 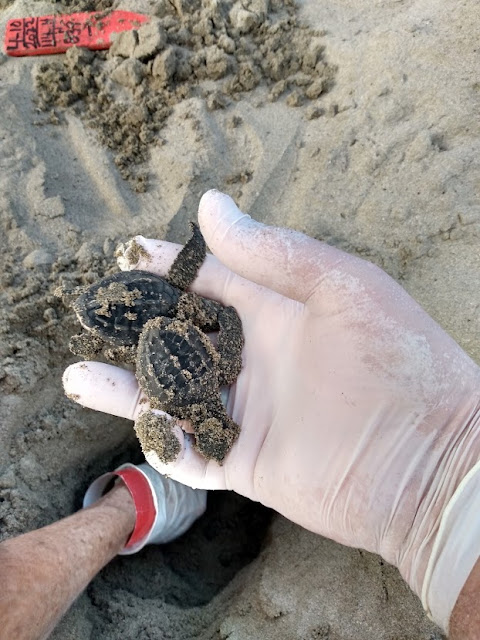 The eggs typically hatch after 45 days and Felix directs us to one of the marked nests and shows us how to carefully dig out the baby turtles. Sure enough the squirming creatures are frantically trying to come out of the sand and we start collecting our 100 babies, each one a perfect miniature of a full grown adult, into a plastic bucket. 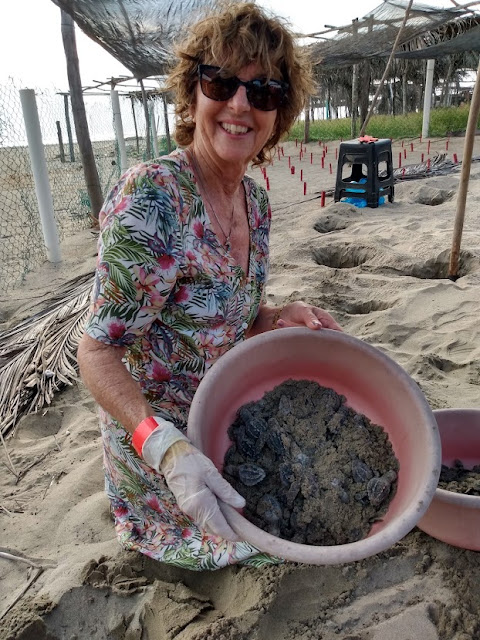 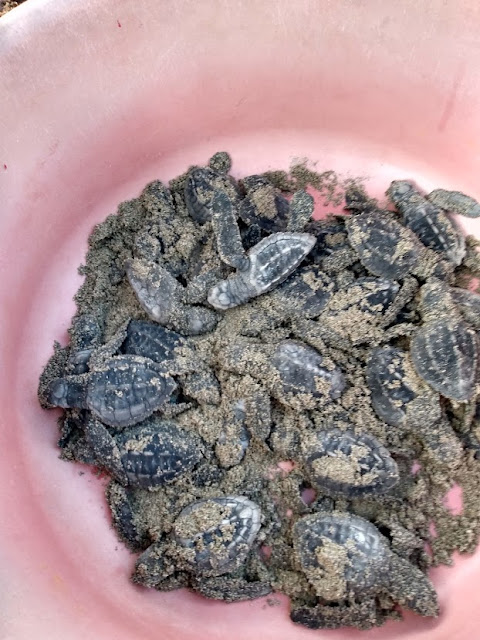 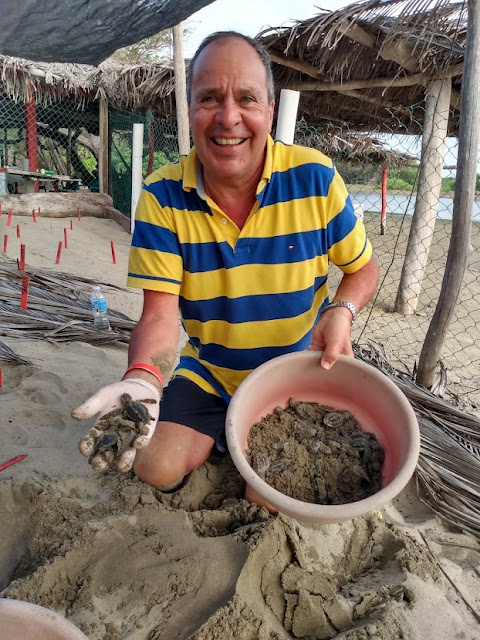 Once we have made sure none of the little guys have been left behind we take our almost overflowing buckets to a table where the turtles can take some time to shake the sand off themselves and get comfortable breathing in a little ocean air. Proud parents of the most adorable babies ever, we of course need to pose with them a little. 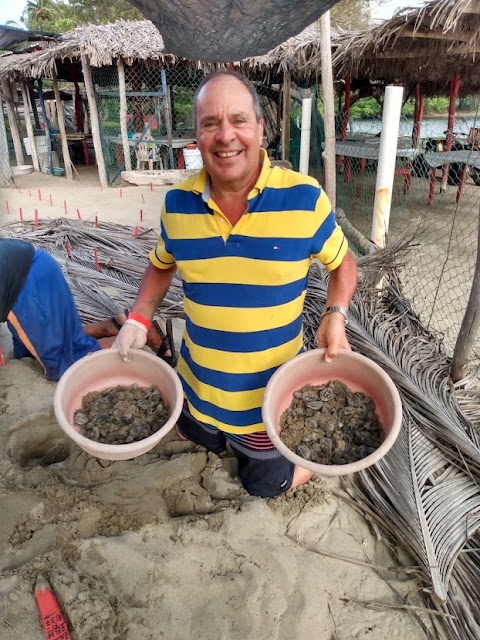 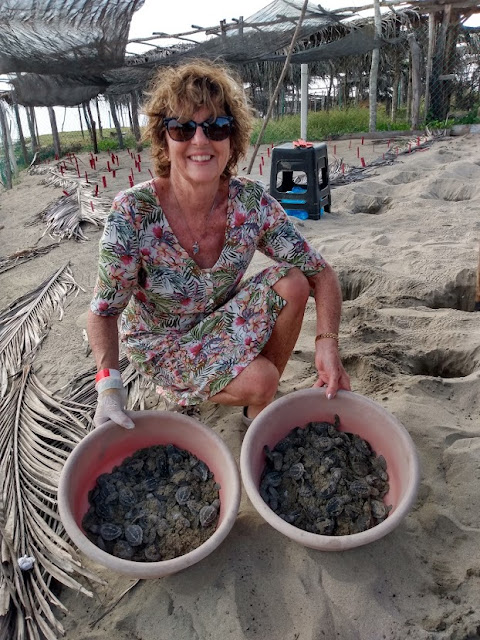 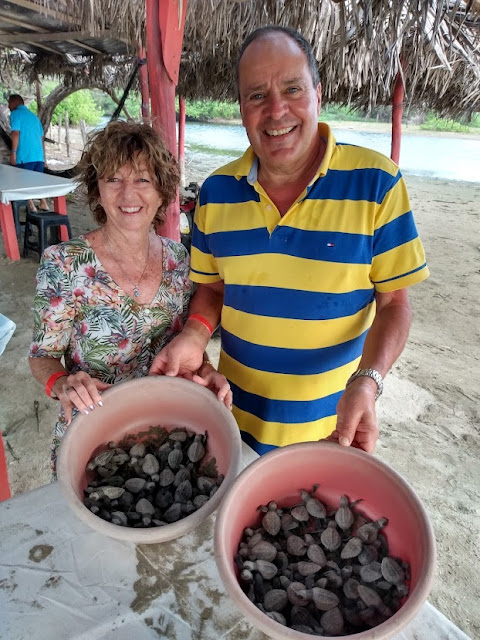 As sunset approached it was time to join up with the others for the big race to the ocean. This was the event we were all waiting for, or rather the turtles were, and we were there to cheer them on as they unerringly made their way to the water with their little legs going as fast as they could. It only took a few minutes and they were in the sea. 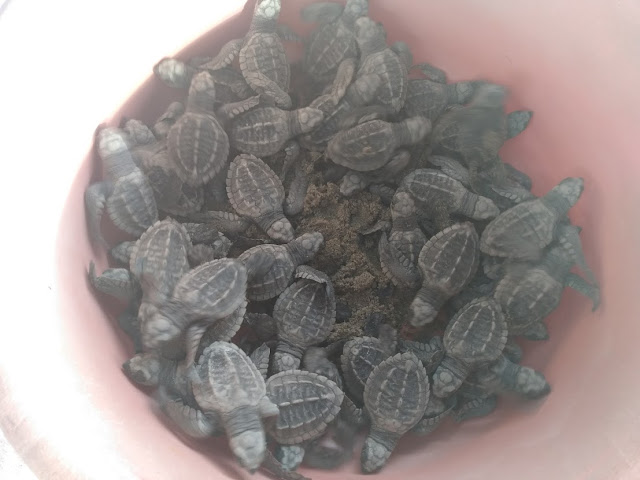 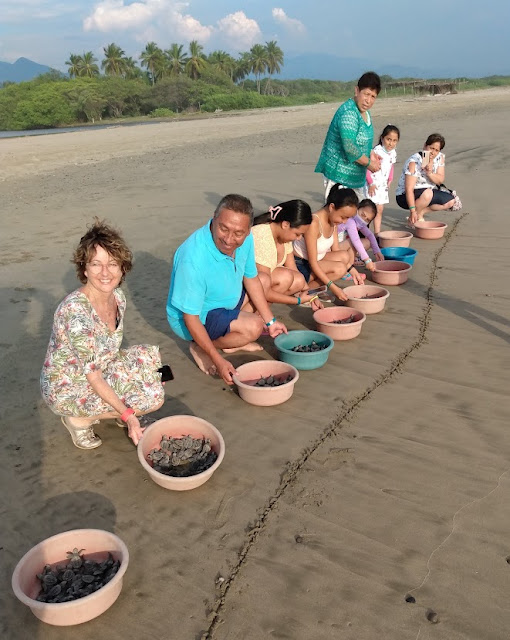 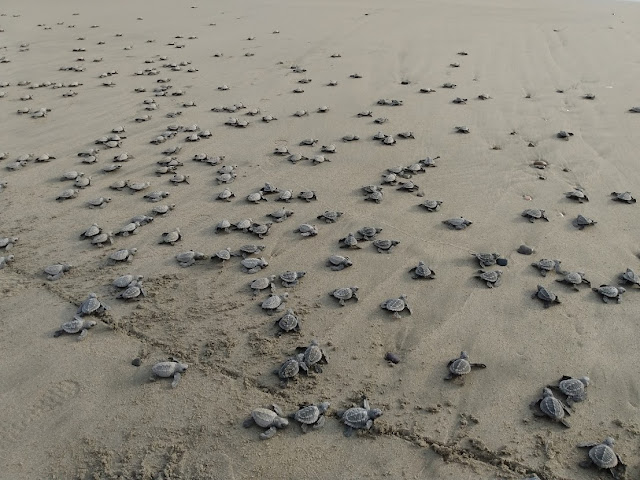 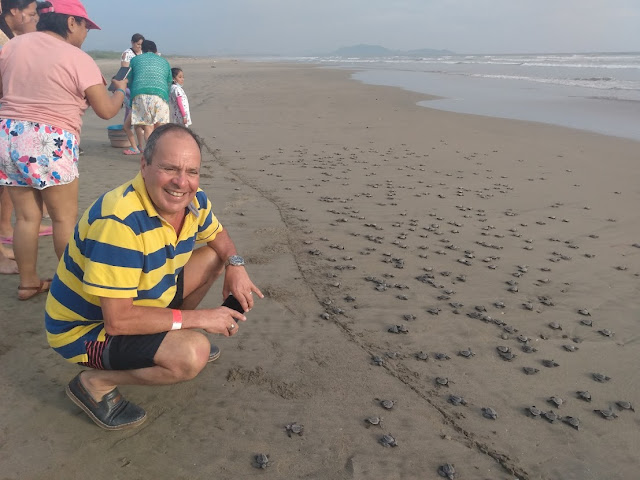 It was a perilous race to the water with seabirds trying to pick them off from the air and who knew what other creatures and hazards were waiting for them in the ocean, but everyone gave it their best effort and they all made it to the first leg of what would be at least a 10-20 year journey before they would mature and the females could return to the same place and repeat the cycle. On average however, only one of the 100 eggs in a nest will survive to adulthood, but we had our money on this little guy who was determined to return to his sender. 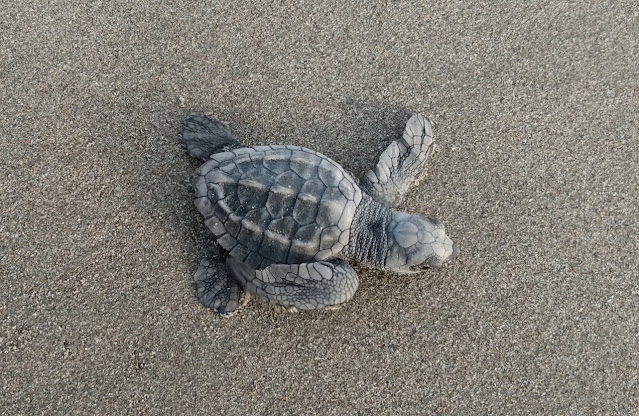 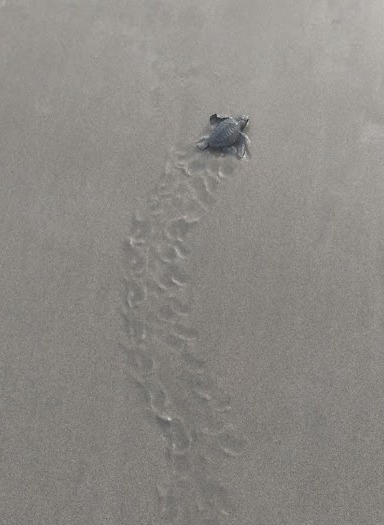 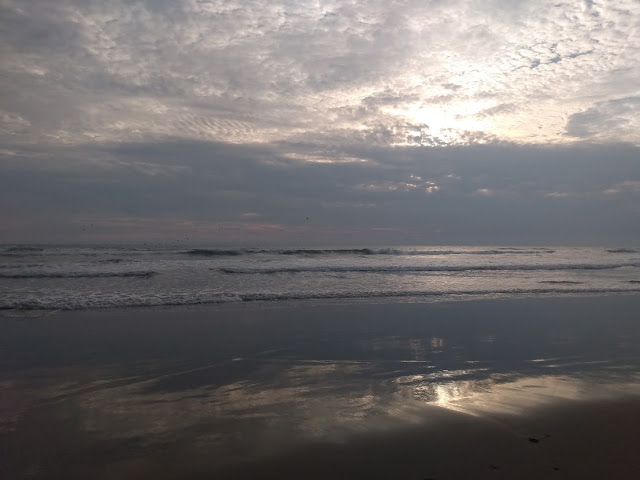 Posted by Nelson Quiroga at 2:14 PM No comments: