Pay You Back With Interest 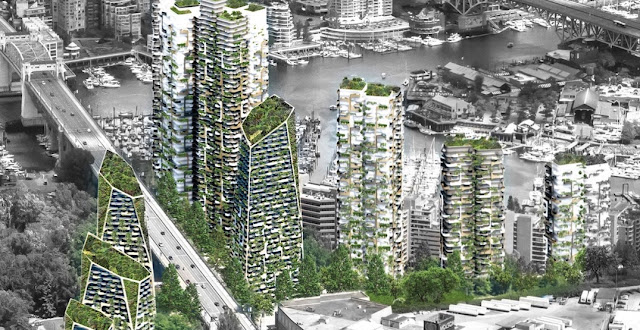 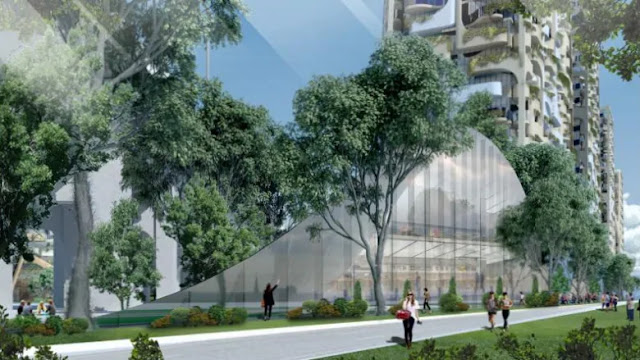 The biggest news for Vancouver as the month of November got started was the announcement by the Squamish Nation of their plan to double the size of their original development to 6,000 apartments. Spitting in the eyes of all the Kitsilano NIMBY's and the City's gridlocked planning/zoning department, neither of whom have any jurisdiction or say in how they can proceed, this First Nations group, in partnership with Westbank, is going to build something that is truly radical in design to address both the shortage of rental housing in this City and how the environment is impacted.

Originally a two-tower 3,000 unit development that would be 56 storeys high, another 9 towers have now been added to the plan. In addition to being a long term rental project that will maximize revenues for the Squamish Nation, what makes this development truly unique is the almost complete absence of parking spaces. Residents will need to either walk, bike or use transit to get around instead of relying on the automobile, which would make this a first for Vancouver and finally show some leadership on how to build a community that takes its impact on the environment seriously. 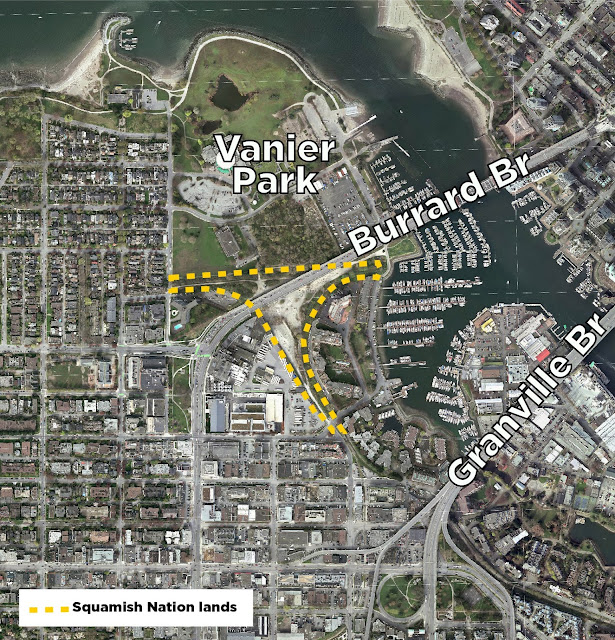 Sadly this oddly T-shaped track of land at the entrance to Kitsilano is all that remains of the Squamish Nation that once resided in an area called Senakw that included what is now Vanier Park. In 1877 the federal government granted 35 hectares of land to the 20+ families/150 inhabitants living there and called it the Kitsilano Indian Reserve No.6.  However, by 1903 the City considered the reserve "no use to anyone, an eyesore to the city, an easy resort for criminals, and a waste of valuable land that could be used for better and more practical uses". In 1913, at the request of the City of Vancouver, representatives of the provincial government coerced the residents into selling the land and paid each male head of family $11,250.00 to evacuate. The residents and their possessions were loaded onto a barge and then the village was set on fire and burned to the ground. The barge was cast adrift in English Bay until the owner of Cates Tugs rescued them and towed them to the Squamish reserves in Howe Sound and Burrard Inlet.

Over the next 100 years the Kitsilano Indian Reserve No. 6 had railway lines going through it, the Burrard Street bridge was built on it along with the Vancouver Museum, Planetarium, Maritime Museum, and the Molson's brewery. But in 1977 the Squamish Nation sued the federal government for failing to protect them from their reserve lands being wrongfully taken and finally, after 23 years of litigation, were awarded in 2000 $92.5 million and the return of 5 hectares of land which is what they are planning now to develop. 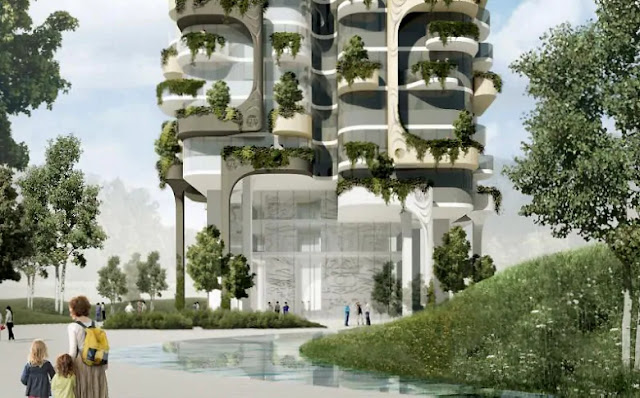 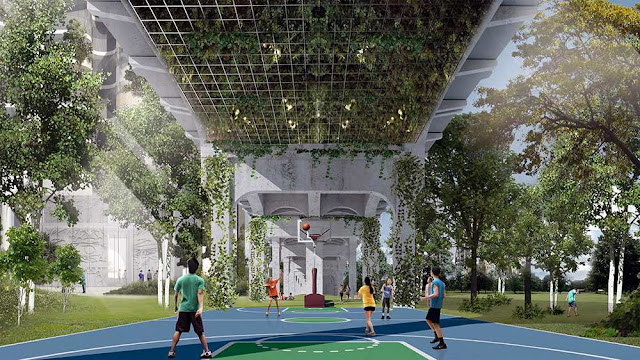 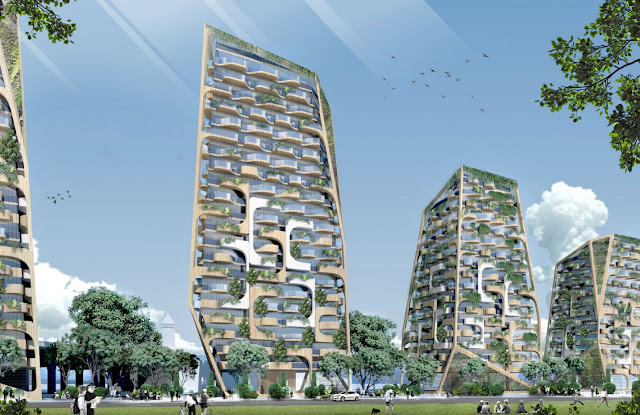 Building under and around the Burrard Street bridge will be a challenge but already the renderings of what might be possible has caught the imagination of many local residents and City Hall is quite supportive. Recognizing this as an opportunity to try and correct an historical injustice the City has made it a goal to create "sustained relationships of mutual respect and understanding with local First Nations and the urban Indigenous community." Other than provide services such as fire, police, water, sewage and waste removal, which the Squamish Nation says it will pay for by collecting taxes on the development, there is nothing else the City needs to be involved in. 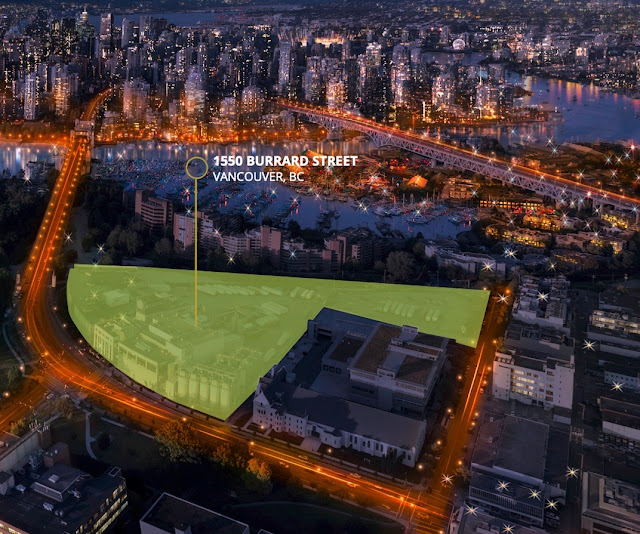 What would perhaps be even more interesting is to see how Concord Pacific, the new owners of the old Molson brewery site right next door, decides to proceed with their development. Will they go through the many years of hearings, delays and other obstacles of the infamous Vancouver planning process or will they do something really radical and donate the land back to the Squamish Nation in return for a share in the profits? This would allow them to immediately capitalize on a high density development free of the City's involvement and potentially generate an even higher return on investment. 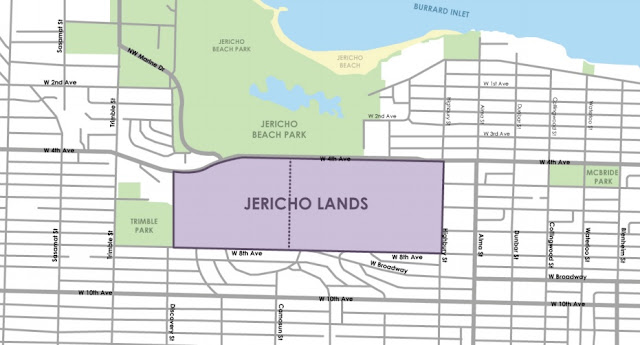 Just around the corner of Kitsilano are the Jericho Lands which are now owned by a consortium of Musqueam, Squamish, and Tsleil-Waututh First Nations and a Federal Crown corporation called the MST Development. This 21 hectare parcel is larger than southeast False Creek which includes the Olympic Village and is expected to have thousands of homes. MST also owns an 8 hectare parcel at Heather and 33rd Avenue and the Musqueam are developing a 9 hectare parcel with Polygon called Lelem, which means home, with over 1,200 homes on the UBC Endowment Lands. With First Nations having first right of refusal to buy back any federal or provincial land being disposed of they are actively making deals in Vancouver and other municipalities as a way of ensuring income for their members. Best of all none of these developments need City approval or consultation which may finally bring about some changes to the tepid mindset of the bureaucracy currently running things. 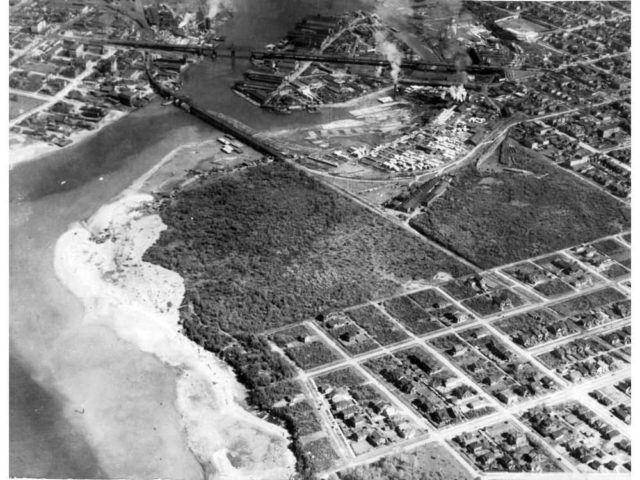 The neighbourhood of Kitsilano, originally the village of Senakw, is an anglicization of Chief Khatsahlano's name by the Canadian Pacific Railway who developed the neighbourhood. The grandson, August Jack Khatsahlano, was also a Squamish Chief and Vancouver historian who shared his indigenous oral history with Vancouver's first archivist, Major J.S. Matthews. Born in Stanley Park in 1877 he died in 1971 after witnessing the utter transformation of his homeland from a village on the shoreline with an abundance of fish and wildlife to a city filled with high-rise buildings.  While there is a certain sadness in the changes that have occurred in his lifetime at least now the traditional lands of the Squamish Nation will once again be providing for its dislocated people and it will be paying them back with interest.

Posted by Nelson Quiroga at 2:03 PM