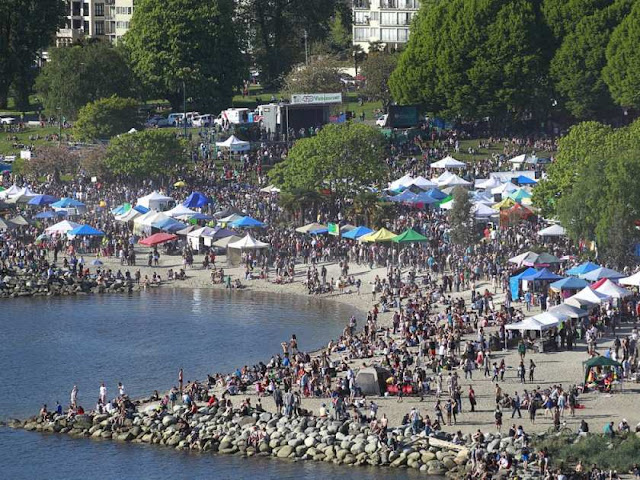 For the second year in a row Vancouver's annual 4/20 event was held at Sunset Beach and police estimated the crowd at more than 35,000 which was even bigger than last year's. 4/20 (which stands for April 20th) is, for anyone who didn't already know, the world recognized day of celebration for the planet's dope smokers. Throughout the day the Vancouver locals make their way to the designated rally point and spend the day skipping out (if they work or go to school) lighting up, and waiting until 4:20 precisely when everyone exhales at the same time and blows a cloud of marijuana smoke into the atmosphere. In Vancouver this has been going on for 22 years. 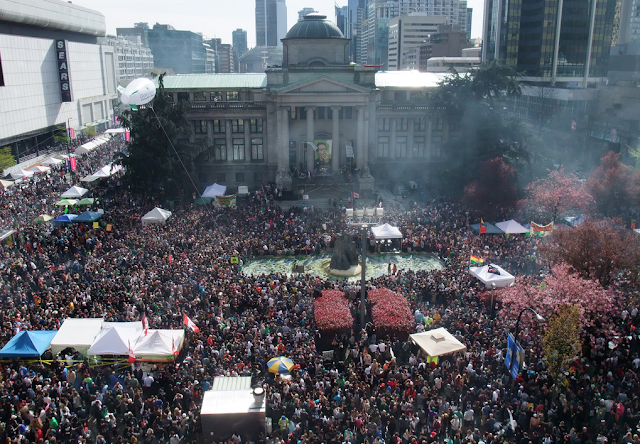 Getting together to smoke some pot at 4:20 p.m. has been allegedly happening since 1971 when some high school students in San Francisco coined the term. In past years the event was held in front of the Vancouver Art Gallery, which was formerly the city's courthouse, in a none too subtle dig at the forces of law and order which, until this year, had deemed cannabis to be an illegal substance. As with alcohol, cocaine, heroin, or any other substance governments try to ban under the hypocritical guise of morality, it only serves to drive it underground and into the hands of criminals who thrive on the profits. With a government that has finally seen the light, Canadians will soon be free to get drunk or stoned with impunity. 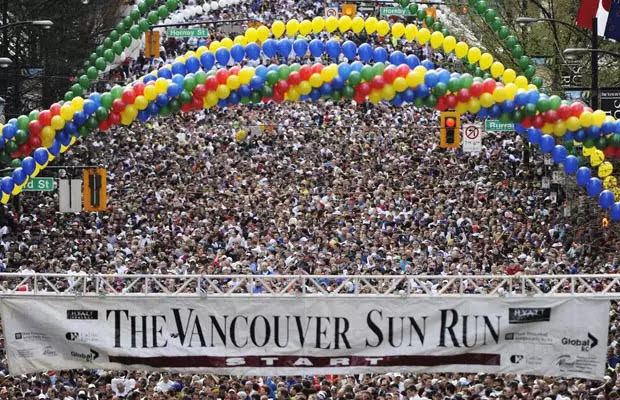 On the 3rd/4th Sunday of every April a very different sort of get together happens and that is the Vancouver Sun Run. For 33 years now thousands of people have been getting together for a 10 km run/walk through the downtown to promote health, fitness and community spirit and to support amateur athletics. It has grown to be one of the world's largest race events that even Vancouver's occasional rain can't suppress. What the two events do have in common however is group think. Not for these folks the quiet contemplation of life while getting a buzz or leaving footprints in the sand/snow where nobody has gone before. Yes it's all in good fun but it's also another example of sheep-like behaviour where collective actions overrule individual thinking. Too often this has been the cause of most world problems and not enough of the solutions when everyone so desperately wants to be part of the "in crowd".
Posted by Nelson Quiroga at 11:43 AM 3 comments: