Shark attacks make for some of the most dramatic news stories around the world and this summer was no exception with Australia, Florida and South Africa continuing to be the most common locations where they seem to occur though there were also reports from Hawaii and California. But, as dramatic as they are, on average only 75 attacks are actually reported each year and only 1/3 of them ever end up being fatal.  This is because most of the time the shark attacks are unprovoked and, in a case of mistaken identity, referred to as "hit and run" or "bite and run" the shark does a quick test and quickly determines the human isn't worth eating. 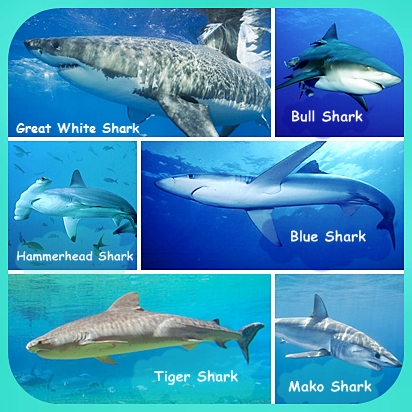 Not all sharks are created equal and out of nearly 500 species in the world it's really only the Great White Shark, Bull Shark and Tiger Shark that are responsible for fatal unprovoked attacks. On the other hand thousands of people die every day by drowning and that of course hardly ever makes the news. While there are 14 different shark species found in B.C. waters, including the Great White, there have never been any recorded shark attacks and encounters of any kind are rare.

Not surprisingly the salmon shark is one of the most common sharks in B.C. and, while they can be up to 10 feet in length and 450 lbs in weight, they are fortunately primarily only interested in salmon. The rare and intriguing 6 gill shark can get up to 15-20 feet in length but, because of the great depths in which it normally dwells, it's usually only encountered by scuba divers and it prefers to eat small fish and crabs. But the most common shark of all is the dogfish shark and this is what came across my path the other morning as I was about to start my swim.

Called the dogfish because they hunt in packs like dogs, this shark can travel in schools of hundreds of individuals and is the most abundant shark in the world. Typically around 3-4 feet in length it only eats small fish and is not considered dangerous though it does have slightly poisonous dorsal fin spines. In England they are very popular for fish and chips but here they are labelled trash fish and usually thrown back in the water by fishermen because there's little or no demand for them.

A little bit of trick photography and positioning made the dogfish shark look a lot bigger than it actually was which I suppose feeds off the drama these creatures continue to attract when in actual fact they are under severe threat of extinction thanks to the wasteful and horrific practise of "finning" that goes on around the world.  How this dogfish ended up on shore is a bit of a mystery but at least its fins were still intact and Dennis and I weren't in any mortal danger going for our swim. Ironically it's fear of shark attacks that keeps people out of the ocean, where of course they could drown without the right training or equipment, so perhaps we should thank the sharks for keeping us safe.
Posted by Nelson Quiroga at 11:20 AM