So there I am around 7:00 a.m. ready to go for my swim on a glorious, spring morning when I notice a bit of a sheen on the water as it's washing up on the beach.  Looks like someone spilled some kind of petroleum product here, thinks I, maybe a little gasoline or some nasty bilge water that's drifted in but, as it was only on the water by the edge of the shoreline, I didn't give it much thought and jumped in.  Everything seemed perfectly normal and it was only when I was finishing my swim an hour or so later that I realized something was up because there were all sorts of people on the beach with cameras and microphones. When they came up to me and asked if I knew I had been swimming in the middle of an oil spill my heart sank because I knew this everyone's worst nightmare.

With a lively debate raging in the City for more than a year now over pipelines and oil tanker traffic who would have suspected a brand new grain carrying freighter, on its maiden voyage, to become the flashpoint every politico has been waiting for.  It may have only leaked 2,800 litres of oil, which is a drop in the bucket compared to the 30 million gallons spilled by the infamous Exxon Valdez, but even one litre is too much for most Vancouverites. This couldn't have come at a worse time, but more spectacular than the spill itself was the incredible display of incompetence demonstrated by each and every participant in this chaotic drama.

First off there was the captain of the ship Marathassa, who must have known there was a problem, since his boat was surrounded with oil from the previous day when it was first reported by a passing sailboat, but he chose to ignore it and initially refused to cooperate with authorities later asking questions. He should have been the first to radio in the problem and offer any possible assistance which would have demonstrated leadership and a commitment, on behalf of the shipping industry, to transparency, safety, and respect for the environment. Instead, he hurt the reputation of ship captains everywhere and helped foster a public perception they aren't to be trusted.

Then we have the Coast Guard which took 6 hours to respond to the call from the sailboat and confirm there was a problem. By then of course it was very dark when another organization was finally called in to get started on the booming to contain the spill. The Coast Guard appeared to forget all about tides and currents (something that should be in their DNA) and were surprised when the oil slick started moving all over English Bay and washed up on the beaches in both North Vancouver and Stanley Park. It took them another 12 hours before they notified City officials so of course there were no signs up on the beach advising swimmers, boarders, or people walking their dogs, to stay out of the water. They then had the cheek to say that cleaning up 80% of the spilled oil within 36 hours was an "amazing success."

In the meantime it took another 24 hours before either the Mayor or the Premier was prepared to step up to the microphone, presumably because of the time it took to work out the spin doctored messaging they were going to deliver. Robertson of course wanting to maintain his dubious green credentials but not wanting to be overly critical of those above who might be writing transit funding cheques, and Clark wanting to salvage her plan for shipping oil & gas that has now clearly sprung a huge leak. In the end all they could come up with was a "blame the federal government statement" that once again showed a complete lack of leadership.

Noticeably absent in any of the clean-up efforts were the Coast Guard themselves, any of the Vancouver Fire Boats, or the Harbour Patrol.  It was all done by a private corporation, Western Canada Marine Response Corporation, which maintains a base in Burrard Inlet specifically for this purpose. WCMRC is owned by the oil companies; Imperial Oil, Shell, Chevron, & Suncor as well as Trans Mountain pipelines, and its website claims to have over 2,000 members including oil handling facilities, cruise ships, and freighters visiting our ports. Not sure if the company that owned the Marathassa is a member but the others obviously had a vested interest in making sure that anything to do with an oil spill would be handled quickly given the optics and their common desire to transport oil.

In the meantime locals and activists swarmed the beach chanting, waving banners, and looking for evidence of environmental damage from the remaining 20% that hadn't been cleaned up. Fortunately there wasn't much to worry about and there were plenty of volunteers patrolling the beach, raking the sand, and cleaning up any of the gooey flotsam, jetsam, and seaweed that washed up on the shoreline. I did get some of it on the bottom of my swim boots, but thankfully it appears not a single bird was affected.

If this is the best we can do for a pathetic engine room leak on one of the hundreds of regular freighters at anchor here throughout the year it certainly doesn't bode well for dealing with a major oil tanker spill or a ruptured pipeline.  The ensuing media circus ensured the environmentalists and anti-pipeline folks scored some major points though it really had nothing to do with the oil industry.  What it really demonstrated was a complete lack of planning and process on the part of government agencies at all levels who are supposedly responsible for keeping the harbour safe and clean.

One thing for certain is the beach is now closed and I can't go for my daily ocean swim. This of course makes me a very unhappy camper, particularly with the realization that something I have always taken for granted can so easily be taken away. I know the Emerald Sea will return again but until then, for the seals and me, it's just black water.
Posted by Nelson Quiroga at 2:20 PM 1 comment: 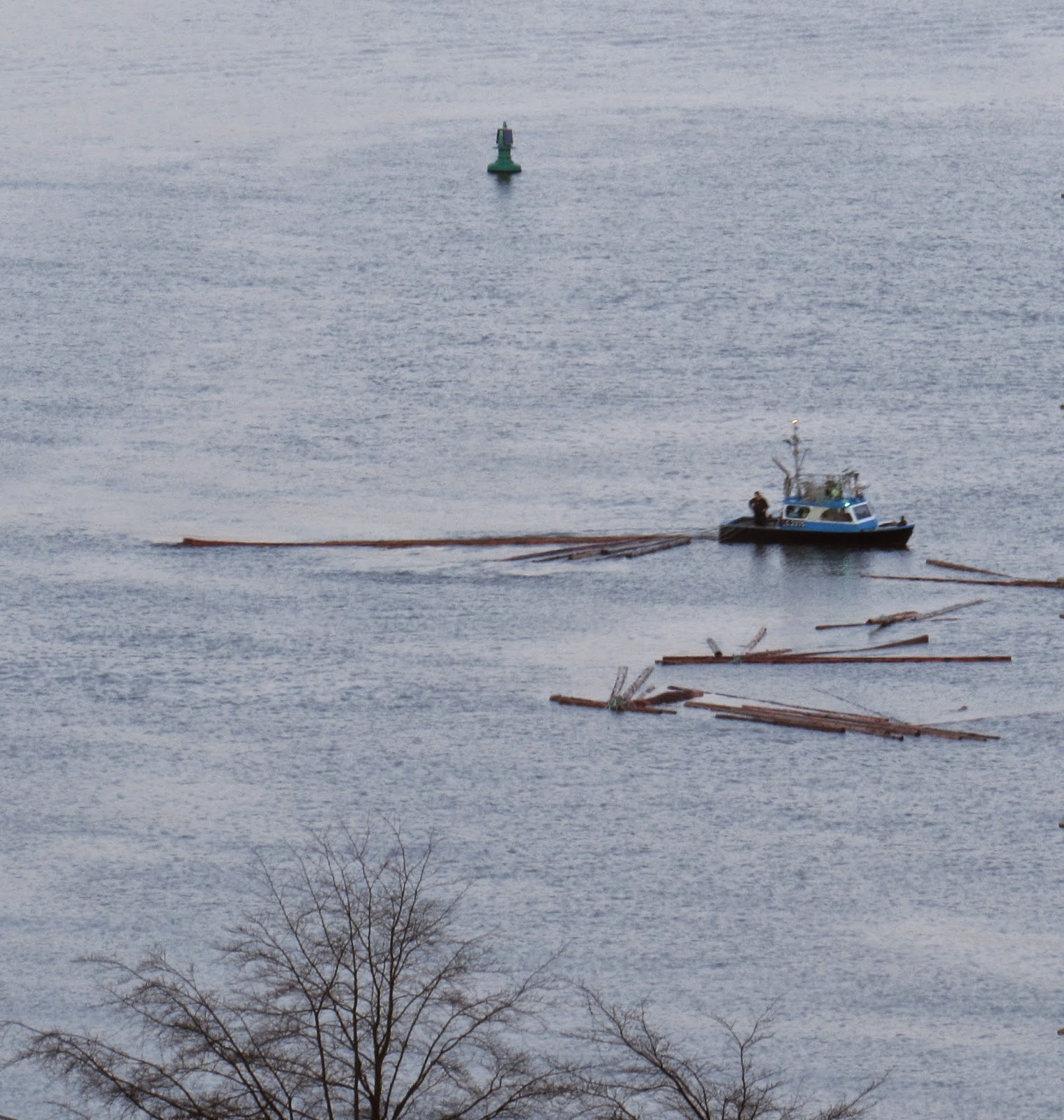 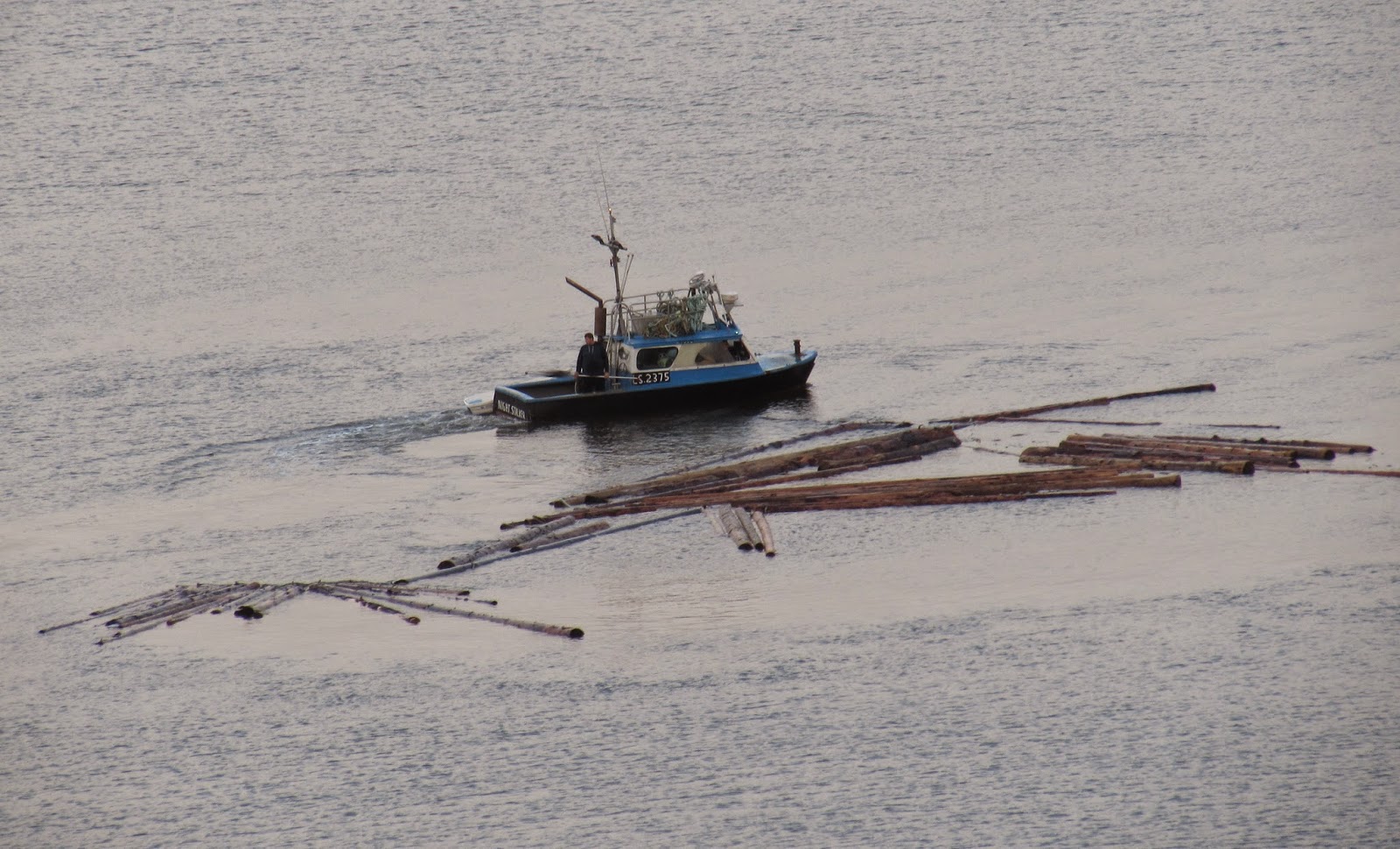