Throughout the fall and winter months I get to enjoy the clear waters of English Bay for my daily swim but, as things start to warm up, this soon changes and, by late spring, the ocean is cloudy and filled with sediment from the annual spring snowmelt runoff of the nearby Fraser River.  Flowing for more than 1,375 kilometres from Fraser Pass near Mount Robson in the Rockies to the Strait of Georgia, the actual amount of water the river carries is dependent on the melting snow but, by the time it reaches Georgia Strait, it's discharging an average of 8,000-10,000 cubic metres per second into the ocean.  (In the winter this goes down to around 1,000 cubic metres per second)  In June 1894 the record was set at 17,000 cubic meters per second.  Along with all this fresh water is an estimated 20 million tons of sediment that gets dumped into the ocean.

There is so much sediment being carried by the Fraser River, it can easily been seen from outer space and, over the last 10,000 years, this great pile of sediment has accumulated as a delta where the Fraser River flows into the Strait of Georgia.  The tidal flats and marshes of this delta are vital habitats for salmon fry and migratory waterfowl and, as the river mixes in with the salt water of the ocean, an important exchange of nutrients and natural flushing takes place that has a profound impact on the surrounding ecosystem.  Countless scientific studies have been done to try and measure the impact on salinity, water temperature, plankton growth etc. but the most obvious effect of all this sediment is that the delta formed at the mouth of the Fraser just keeps expanding.  In the charts prepared by Natural Resources Canada, you can compare the changes that have evolved over the past 10,000 years, with this annual outflow of sediment.

In the past this annual spring runoff would produce widespread flooding in the Fraser Valley with the Fraser River depositing silt and clay over the floodplain to build up an incredibly fertile farmland, much like the annual flooding of the Nile.  In the 1900's however, construction of dykes was started from Agassiz to Georgia Strait, protecting 65,000 of the 75,000 hectares of floodplain from Hope to the mouth of the Fraser which is mostly farmland but also includes the cities of Chilliwack, Mission, Abbotsford, New Westminster, and Richmond. Other than some minor flooding in 1972 there hasn't been a major flood since 1948 when the dykes were breached and 1/3 of the Fraser Valley was again flooded.

While dykes have contained the flooding, it has also meant there is no more fresh silt and nutrients being deposited on the land as a natural fertilizer.  Fertilizer now has to be added to farmland, along with pesticides and other chemicals, all of which eventually leach out through the ground water table and back into the river. But not all of the silt is carried to the ocean or settles in the expanding Fraser delta, a large portion simply settles in the river bottom and clogs up the shipping channels.

In order to keep these shipping channels open the Port Authority has to maintain an active dredging program.  In fact the Port Authority estimates that it it dredges out 3.5 million cubic metres of silt and sand annually just to keep up, which in itself is enough to fill Rogers arena.  Dredging, however, is only carried out on the primary channels as there is no budget for dredging secondary channels and, as they fill up, this is causing all sorts of other issues for the affected municipalities. 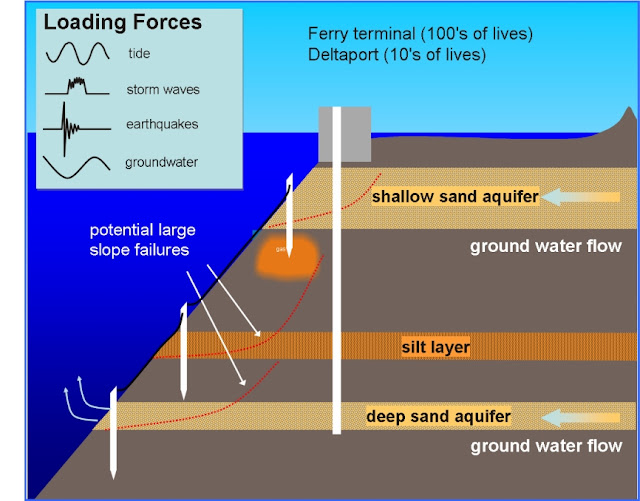 While much of the dredged sand & silt is in turn used in land reclamation projects, and sorted for various uses by sand & gravel companies, a good portion is added to the edge of the river delta itself.  However, as less and less of the delta is being maintained for farm use, and more of it is being used for housing needs and expanded port infrastructure, the risk has now shifted from one of flood to one of slope failure on the outer edge; an underwater landslide as it were.  It has happened before and it could happen again, and the forces that could cause this range from ocean wave activity to an earthquake.

Earthquakes pose special problems for the Fraser delta because conditions are perfect for liquefaction to occur.  Liquefaction is a phenomenon caused by earthquake shaking which turns loose, water-saturated sediment into a fluid (liquefaction). When sediments liquefy, the ground may subside irregularly, causing buildings that are not properly anchored to tilt or collapse. So, try as we may to control the Fraser River with dykes and dredging there are still many unintended consequences to factor in our plans.  In the meantime I'll just wait for the muddy waters to settle like they always do and then things will be clear again.
Posted by Nelson Quiroga at 7:54 AM