One of the nice things about the end of summer is that I have the beach all to myself again.  Not too many people are keen to hang around when it's wet of course, or even, for that matter, when it's sunny because it isn't warm anymore.  Without sun and warmth there isn't much point in lying on a beach no matter how much imagination a person may have.  Sunbathing is strictly a summertime activity in Vancouver.  After that it's off to Hawaii or Mexico.


But there are some people who still love to go walking in the sand no matter what the season is and perhaps even go for a skinny dip in the ocean as well, even if it might mean breaking the law.  No I'm not referring to some weird cult of west coast naturalists, I'm talking about your best friend and mine, the dogs. And if you haven't been around the west end lately you might be surprised to see how many dogs of all shapes, sizes, and breeds are now living in the land of high rise buildings with no back yards.


Not having a back yard can make it difficult for an owner to deal with a dog's daily routine unless a person is prepared to get up every day at the same time, rain or shine, and take Fido for their morning constitutional; doggy bag in hand of course.  There's usually an evening one as well and then sometime during the day a nice run would also be appreciated.  So how and where does a person fit all this into their schedule and stay within the City rules & regulations?


The walking part isn't bad because, as long as the dog is on a leash, they can walk just about anywhere they want except on designated bathing beaches, of which there are 10 along English Bay from Spanish Banks to Third Beach.  Dogs are also forbidden to be in the water adjacent to a bathing beach.  If they want to go without a leash then they need to visit one of the 33 off-leash areas set aside by the Parks Board or swim in an area not being used by bathers.

Even though I swim every day in the ocean I wouldn't exactly call it bathing, that's something I do when I get back home.  Sunbathing, as we've also discussed, is something that's done for only 4 months of the year at best, so what about the other 8 months?  Does this mean the beaches are open for dogs when there is no bathing of any kind going on?  And what are the bathing hours?  The rules aren't very clear.

Where does the bathing beach actually begin?  If it's above the high tide water line, which would keep it consistent with the federal rules on where oceanfront property begins, then how can the City forbid dogs from walking, leashed or not, along the water's edge?  For that matter how can the City regulate who is using the ocean when that's something that falls under federal jurisdiction? And if you accessed the shoreline from a non bathing beach can you keep walking along? Again the rules aren't very clear.

I don't own a dog, but personally I don't think there's anything nicer than seeing a dog having a good run along the beach chasing a ball or a frisbee or fetching a stick that's been thrown in the ocean.  The owner's arm usually wears out long before the dog ever does and the dogs are just so happy to get some healthy exercise.  Occasionally a dog will join me in the water as I'm finishing my swim or get curious about a seal that might be lurking nearby but otherwise they really aren't in the ocean all that much.


The fine for not having a dog leashed or being on a bathing beach with your dog is $250.00 and it can go up from there if the dog is impounded or if it doesn't have a license.  Dog owners who take their pets down to the beach in the early morning hours for a walk or a swim may have figured out a few loopholes that keep the enforcement officers away, particularly in the off-season, but it's too bad they have to skulk about like criminals when there are so many other people openly breaking other beach rules. I would much rather see dogs on the beach than the suburban trouble makers, drifters and druggies that hang around always causing a disturbance and not bothering to pick up the trash they leave behind.
Posted by Nelson Quiroga at 1:37 PM 1 comment:

So Much Shoreline And Not Enough Time

Canada has the longest coastline of any country in the world, with over 200,000 kilometres of mostly uninhabited waterways, deep inlets and island shorelines to patrol.  The Pacific Region alone has more than 25,000 kilometres of coastline that is made up of large fjords, countless small islands, the larger Vancouver Island and Haida Gwaii, and the area along the Washington and Alaska borders. The distance, as the crow flies, from Victoria on the Strait of Juan de Fuca to Prince Rupert near the Alaska panhandle is 806 kilometres. 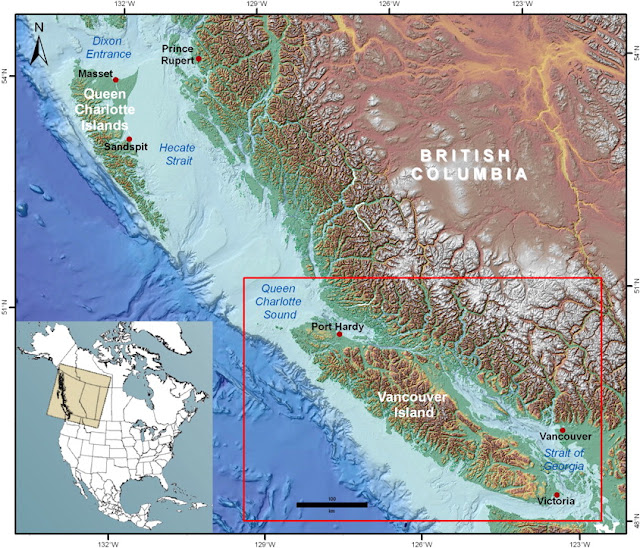 Of course these waterways make for some of the most fantastic cruising grounds in the world for boaters, especially in summertime, but there are also fishing boats, freighters and smugglers using these same waterways year round when sea conditions and weather often get very nasty. To make sure everyone can get around safely, and to help out those who find themselves in difficulty, is the primary function of the Canadian Coast Guard.  Law enforcement, however, is not their responsibility, which is just as well since they barely have enough equipment, personnel or resources to do their search and rescue work and respond to the more than 3,500 calls they receive each year. 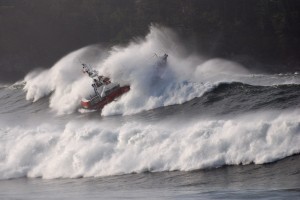 The Coast Guard maintains a fleet of  114 patrol ships, including 4 hovercraft, ranging in size from search and rescue lifeboats to heavy arctic icebreakers, along with 27 rotary and 22 fixed wing aircraft.  While these ships and aircraft are of various age and condition they are all easily recognized by their Canadian flag colours of red and white.  28 of these ships and 2 of the hovercraft, roughly 1/3rd of the fleet, are based out of the 13 stations/bases located in the Pacific Region, with the Sea Island and Kitsilano stations serving the Vancouver area.


Seemingly always on the move, the near/inshore patrol vessel Osprey and the hovercraft Siyay are commonly sighted as they zoom around the Vancouver Harbour, Georgia Strait, and Howe Sound checking on boaters in distress.  Built in 1998, Siyay is relatively new compared to the Osprey which was built in 1986.  The Osprey belongs to a group of 6 other boats built in the 70's and 80's that are nearing the end of their lifespan and are being replaced by the more modern, self righting, search and rescue (SAR) lifeboats built after the year 2000.

There are 11 of these SAR lifeboats (with an operating range of 200 kilometres) stationed around the Pacific but there are only 3 mid-shore vessels with a range of more than 2,500 nautical miles to look after all the rest and the newest of those vessels was built in 1991. Even if all these boats were on the move 24 hours a day there would still be a lot of coastline that would never see a Coast Guard vessel from one week to the next.  Fortunately there is also the volunteer Canadian Coast Guard Auxiliary to assist with the coverage model but this group has to rely on donations to cover even the fuel they use. 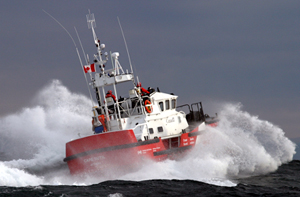 But an ounce of prevention is worth a pound of cure, and that is why the Coast Guard is also responsible for broadcasting the weather and safety notices, providing marine communications and traffic services, and maintaining the more than 2,000 buoys, lights and beacons that mark the majority of rocks and other hazards along the coastline.  These aids to navigation are indispensible to mariners wanting to know their ship's position and it's a year round effort to keep them all properly serviced and functioning. 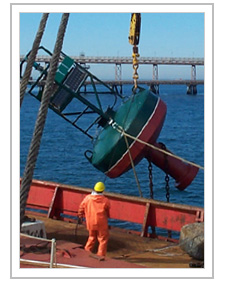 Speaking of aids to navigation, I see these pair of bald eagles quite often as I go past the Q41 buoy on my morning swim.  They would make great auxiliary members if only they could use a VHF radio.  Boaters are supposed to keep the buoy on their port side as they come into False Creek and on their starboard side as they leave.  This would protect them from any of the rocks in English Bay and allow me to swim in relative safety.  For the most part boats stay where they belong but it's nice to know there are other folks keeping an eye on things. 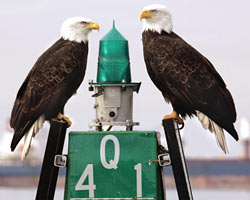 There are over 1,000 employees in the Pacific Region trying to do their job in an environment of ever rising fuel costs, old equipment, and pressures to reduce operational expenses.  A daunting task with demands on the service increasing and the need to have a more proactive display of sovereignty in our waters.  Fortunately the federal government has finally realized it needs to up the ante on a neglected service and has commissioned 8 billion dollars worth of new mid-shore vessels, icebreakers and other special use vessels that will be built here in Vancouver over the next few years. 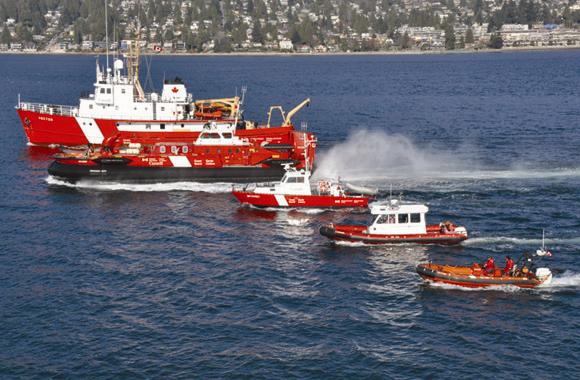